This is my first post in over two months. And it will quite possibly be my last.

The last few years have been full of personal ups and downs (clichéd, I know. Sorry). I'll not bore you with the details, but in 2013 I suffered a nervous breakdown as a result of a really shitty job experience. Ever since then I've struggled with anxiety and depression. To paint a picture for those lucky enough to have never experienced it: it's like being weighed down with a heavy, sodden, stinking duvet (one that even the world's most desperate hobo would eschew). This duvet smothers you a little bit at a time, gradually snuffing out those gorgeous but struggling twin fires of imagination and positivity. And the duvet goes everywhere with you. It drags you down, leaking its filthy grey tendrils into everything around you until there is nothing but the duvet, until you begin to believe that it would be easier for everyone if you just hid yourself away and stayed underneath it forever.

For me the hardest part is that it's so unpredictable. It waxes and wanes, seemingly without rhyme or reason. But it's always there. It's always lurking, waiting to ruin a happy occasion, to spoil a perfectly lovely weekend, or to just make a bad day even worse. I've been on medication to help manage my symptoms ever since I succumbed to a particularly bad episode in the middle of last year. Thankfully, it seems to work, if only for most of the time. And so I'm able to maintain some semblance of normality, to project confidence and positivity even on those days when it really hurts, those days when just getting out of bed is the hardest thing in the world.

I tell you this partly out of selfish indulgence (this is already proving to be way more cathartic than 90% of my counselling experiences); partly out of a desire to be open and honest (until very recently no one but my close family knew about any of this); but, mostly, I just want to give a bit of context. To explain why much of the following stuff - which, to many people, would seem to be nothing more than me making a mountain out of a molehill - is so important to me.

So. Late last year. I had writing goals. I had reading goals. In short: I had BIG plans. But a lingering physical illness subtly exacerbated my mental health issues, and without even realising how I'd got there I found myself partway under the dreaded Duvet. And so, when all my carefully laid plans didn't quite go to, er, plan, I found myself sinking further and further beneath that mouldy old cold duvet, where I silently dwelt on everything I hadn't managed to achieve.

The three that bothered me the most were these:


It'd been going so well, too. Earlier in 2015 I wrote my first ever short story (or novelette, if you will). This is a big deal for me, because it's the first piece of fiction I've EVER finished writing. Not only that, but I managed it only a short time after crawling out from beneath the aforementioned Duvet of Mid-2015. I was pretty damn proud of it, if I'm honest. I still am.

Anyway. Still flushed with my sense of achievement, I re-visited the story a couple of months later; and after a couple of edits (along with an embarrassingly haphazard attempt at designing my own cover) I stuck it on Amazon at the cheapest price possible. Far from wanting to make money, I was merely hoping to reap as much feedback as I could manage in time for my next project: NaNoWriMo '16.

So I set up a free promotion. I spammed social media with posts where I practically pleaded with friends, family and strangers alike to download my book and - most importantly - to let me know what they thought of it. (I know, I know: sound marketing strategy, eh?)

And . . . meh. Yes, friends and family (and strangers) liked and shared my posts (for which I'm incredibly grateful), and yes, a fair few of them downloaded my story. And yes, I ended up with three awesome reviews on Amazon from three awesomely cool people (none of whom are family members, by the way. In fact, I've never actually met any of them in person).

Which put something of a dampener on my motivation for the following month.

I'd already spent a good few weeks in the run-up to NaNo writing notes and getting ready to begin my novel (the bones of which have existed since late 2013). I planned, plotted, prepared; I even told the whole world that I was participating. 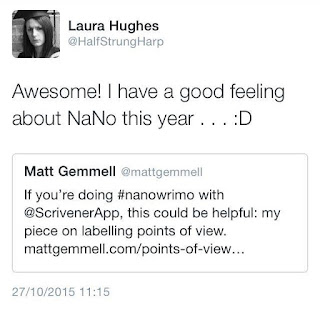 As I said, it was going so well.


Until November. I managed barely half of the daily word count target on November 1st, and half that again on November 2nd. And by November 3rd? Nope, I was done with that shit. Done with staring at my meticulously-organised notes containing thousands and thousands of words, ideas, character profiles, and backstory . . . and, more than anything, I was done with feeling like crap as I scrolled past the celebratory word count updates that had begun to flood my Twitter feed. 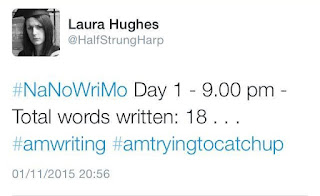 So I gave up. I deleted my NaNo account. I said to myself, again: 'What's the point? No one wants to read my stuff anyway'.
It was a real downer for me. It shouldn't have been. But it was.

So I stopped reading, I stopped writing reviews, and I stopped bothering to maintain this blog. I felt guilty for not keeping up to date with the awesome bloggers I used to follow, and even more guilty for my total lack of motivation in responding to comments and messages on my own blog and social media profiles. 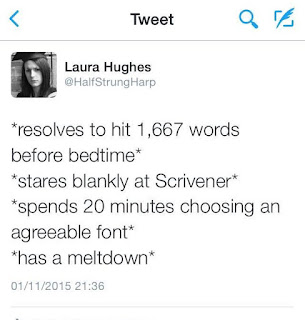 But then something interesting happened. Around this time, I had my first ever experience in beta reading, which unexpectedly skewed my already negative attitude to my own writing. I found that beta reading was - and continues to be - an awesome and educational experience; however, I also found it strangely . . . demoralising. Despite the fact that the story I was reading was (naturally) a bit rough around the edges, I found myself enjoying it as much as I might enjoy any one of the books on my shelves. And yet, its author had confessed to making much of it up as he goes along! So I found myself thinking, more and more: how can I possibly hope to match this?

It took me a while before I realised.

I don't have to match anything.

I don't have to match anyone.

The only expectations I have to live up to are mine.

One person's molehill is another person's mountain. And every mountain climbed is a victory.

Obviously I'm not entirely done with needing the approval - hell, even just the acknowledgement - of others in order to feel like what I'm doing has any sort of worth . . . and I probably never will be. But since I've begun to get my head back under control - and, most importantly, back out from beneath that smelly grey Duvet - I've been able to (almost) let go of my failures, and focus instead on the things I've been getting right.

So, to counter the failures I mentioned earlier, here are three things I absolutely WIN at: 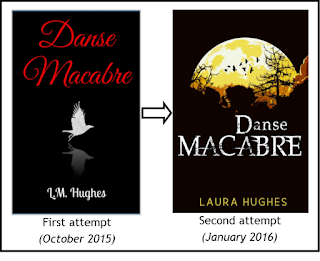 Number three is by far the most important. I've made a LOT of online acquaintances in the 2+ years I've been blogging, and have been incredibly lucky in finding a few who are something really special. Through these I now feel part of what I like to tentatively refer to as my very own little writing circle, which has helped immeasurably with both my motivation and positivity. These lovely folks continue to offer nothing but honesty, humour and - above all - encouragement. And all without having met me in person.

It's thanks to this little circle of support - not to mention my ridiculously patient and doting husband - that I've been so productive during the last couple of weeks, finishing two small writing projects and beginning another. Writing no longer feels like a chore, and the words have been flowing much more freely as a result. I still feel bugged by my lack of reading progress, but maybe if I take the same approach then that too will come back to me in time.

With that in mind, I think it's time for the sun to set on The Half-Strung Harp. Much as I absolutely LOVE reviewing, the pressure of thinking I need to post something (and the guilt that plagues me when I fall behind) just isn't working for me any more.

I want to thank all the publishers, agents and authors who have been kind enough to engage with me. And an even bigger thank you to the awesome bloggers who have regularly commented on here over the last two years: Nathan and Pauline (Fantasy Review Barn); Mogsy, Wendy and Tiara (The Bibliosanctum); Bob (Beauty in Ruins); Kaja (Of Dragons and Hearts); Lynn (Lynn's Books); Rabindranauth (Drunken Dragon Reviews); Danya (Fine Print); Lisa (Tenacious Reader); Wendell (Bookwraiths); and many others.

Naturally, I'll still be around on Twitter and Facebook. And I'll still post reviews on Amazon and Goodreads; they just won't be as long or as detailed (or as prolific) as the ones I've previously written and published here. (Well, probably.)

On that note, I'll say goodbye. Thanks to all who've helped me climb this mountain. I'm off now to go and tackle a new one.

See you at the top.