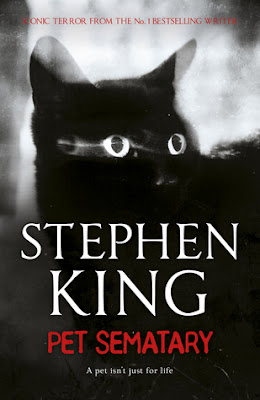 Rambling, old, unsmart and comfortable. A place where the family could settle; the children grow and play and explore. The rolling hills and meadows of Maine seemed a world away from the fume-choked dangers of Chicago.

Only the occasional big truck out on the two-lane highway, grinding up through the gears, hammering down the long gradients, growled out an intrusive threat.

But behind the house and far away from the road: that was safe. Just a carefully cleared path up into the woods where generations of local children have processed with the solemn innocence of the young, taking with them their dear departed pets for burial.

A sad place maybe, but safe. Surely a safe place. Not a place to seep into your dreams, to wake you, sweating with fear and foreboding . . .


Pet Sematary was one of the first 'adult' books I ever read. I must've been about thirteen years old when I got a bit tired of constantly re-reading Lord of the Rings, and Harry Potter, and Sabriel, and decided to go trawling my dad's bookshelves for something new. Of all the books in his modest collection (mostly Stephen King and James Herbert) I went with this one simply because of the title: not only does it have the word 'pet' in it (I've always been an animal-lover) but also the word 'sematary', intriguingly misspelt (yeah, I've also always been fairly morbid . . . and a spelling Nazi to boot).

It's fair to say that back then I was impressed by my first foray into the world of grown-up horror fiction; I must have been, given that I quickly moved on to devour some of the other books my dad had on offer. Re-reading Pet Sematary now - fifteen years or so since that first time, dear god I feel OLD - I found it just as enjoyable, yet can also appreciate just how much of it must have gone right over my head when I read it as a kid.

An example of this is the foreshadowing. Alright, so this time I had the advantage of a fairly solid recollection of most of the novel's key events, but still. So many things, both big and small - dreams, casual one-liners, omens and relentless symbolism throughout - conspire to make the story feel much more thrilling, and somehow much more than just the sum of its parts.

Another thing that took me by surprise is the sheer sense of tragedy that permeates the story right from the beginning. From a horrific death on protagonist Louis Creed's first day at work, along with both of his children suffering minor injuries on their first day in their new house, to his wife's traumatic past, and right up to the key events of the story, the whole thing is a rockslide of tragedy and pathos, gaining in momentum and horror as the story progresses. Although a bit slow to start, and with some relatively uneventful chapters throughout, I felt utterly compelled to read the last 150 pages or so all in one sitting.

Throw in creepy nightmares and disturbing local history, casual references to local superstitions and universal zombie-lore, gore-laden descriptions and settings that made the hair on the back of my neck stand on end . . . yep, Pet Sematary is one hell of a horror story.