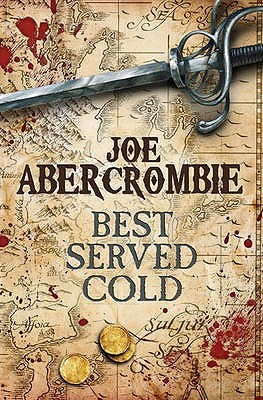 Springtime in Styria. And that means war.

There have been nineteen years of blood. The ruthless Grand Duke Orso is locked in a vicious struggle with the squabbling League of Eight, and between them they have bled the land white. While armies march, heads roll and cities burn, behind the scenes bankers, priests and older, darker powers play a deadly game to choose who will be king.

War may be hell but for Monza Murcatto, the Snake of Talins, the most feared and famous mercenary in Duke Orso's employ, it's a damn good way of making money too. Her victories have made her popular - a shade too popular for her employer's taste. Betrayed, thrown down a mountain and left for dead, Murcatto's reward is a broken body and a burning hunger for vengeance. Whatever the cost, seven men must die.

Her allies include Styria's least reliable drunkard, Styria's most treacherous poisoner, a mass-murderer obsessed with numbers and a Northman who just wants to do the right thing. Her enemies number the better half of the nation. And that's all before the most dangerous man in the world is dispatched to hunt her down and finish the job Duke Orso started...

Springtime in Styria. And that means revenge.


Damn, but I’d forgotten how bloody awesome this book is. Darker, bloodier and even more entertaining than Abercrombie’s First Law trilogy, Best Served Cold is the ultimate tale of revenge, a tale packed with pain, fury and absurdity from its spectacular opening sequence to its final poignant pages.
The story is of course set in the world of First Law, though several years after the events of the original trilogy. Here we are introduced to the ‘exotic’ land of Styria, a fractured continent hosting a decades-long civil war at a time commonly referred to as the Years of Blood. Although Best Served Cold could probably be read as a standalone story, the sheer amount of references to the original trilogy that it contains – not to mention cameo appearances from several characters – means that those already familiar with the events of First Law will likely enjoy it considerably more than those new to Abercrombie’s world.
The premise of Best Served Cold is simple: heroine is betrayed - heroine gets back up again - heroine sets out to get revenge. And at first it really is that simple. Monza Murcatto, the infamous Butcher of Caprile, sets her sights on seven enemies, and vows to do anything she needs to in order to see them all dead. Recruiting a merry band of thugs – including a poisoner, a Northman and a torturer – she embarks on her glorious mission. But perhaps revenge isn’t all it’s cracked up to be. Perhaps the people she trusts are the ones holding the knives . . . and perhaps Monza herself isn’t quite everything she appears to be.
Best Served Cold is Abercrombie’s absurd and bloody take on the otherwise ordinary revenge trope: absurd because of its eclectic mix of characters, and bloody because of the chaos they cause. But it’s also an insanely fun and entertaining journey, with the plot taking something of a backseat to colourful characters who gradually reveal themselves to be so much more than the exaggerated caricatures they first appear to be. The world in which they live is equally colourful, with vicious politics and treacherous leaders continually influencing critical events. The settings in particular are fantastically vivid and immersive: even now I can clearly visualise every bloody sunset, picture every pane of glass in the roof of the Banking House of Valint and Balk, startle at the canal boats looming out of the fog in gloomy Sipani and wonder at the majesty of impregnable Fontezarmo. Though Styria is certainly not a place anyone in their right mind would choose to live, I found I could picture its various regions just as vividly as if I’d actually been there.
Although often dark and suffused with bleakness, Best Served Cold is also frequently hilarious, particularly those chapters told from the viewpoints of Nicomo Cosca and Castor Morveer. Ironic observations, humorous dialogue, self-deprecating comments and hilariously inappropriate remarks are particular specialties of Abercrombie’s, and Best Served Cold abounds with all of them. Abercrombie cleverly blends grit and gore with laughter and levity, all of which conspire to create a perfectly dark, gritty tale of revenge and ruin. This is Abercrombie at his absolute best.
5/5
Posted by Unknown at 20:18