Review: 'A Darker Shade of Magic' by V.E Schwab 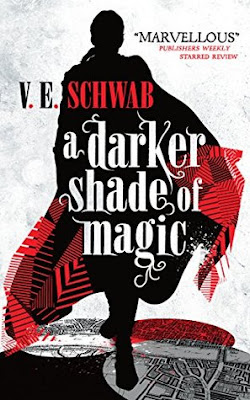 Kell is one of the last travellers — magicians with a rare ability to travel between parallel universes connected by one magical city. There’s Grey London, without magic and ruled by the mad King George III. Red London – where magic is revered, and where Kell was raised alongside the heir to the empire. White London – where people fight to control the remaining magic and magic fights back. And once there was Black London . . .

Officially, Kell is the Red traveller, carrying letters between the monarchs of each London. Unofficially he is a smuggler, a defiant hobby with dangerous consequences. His escape to Grey London leads to a run-in with Delilah, a cutpurse with lofty aspirations, who forces Kell to take her on a proper adventure. But perilous magic is afoot, treachery lurks at every turn, and an adventure becomes a mission to save all of the worlds.


I’m a little bit embarrassed to admit that I bought this book solely because of its cover. It- Actually, no, I’m not embarrassed at all: that’s what covers are for, isn’t it? And that is one seriously gorgeous cover.


Luckily there’s an equally gorgeous story lying behind it. A Darker Shade of Magic is filled with beautiful settings and bloody magic, cross-dressing thieves and nefarious villains, magical utopias and fearsome dystopias, not to mention fun adventures and several heroic attempts to save the world. Or I should say worlds, of which there are four. Each of the four worlds – closed off from one another after terrible past events – are completely different, yet all have a single common point: the city of London. Each of these Londons (not all of which are actually called London) is vastly different from the others: Red London is a magic-infused paradise, Grey London is akin to early 19th century England, White London is dangerous and filled with half-starved cannibals, and the less said about Black London the better.


A Darker Shade of Magic focuses on two incredibly likeable characters: Kell, a powerful magician and adopted member of the Red London royal family; and Lila, a dirt-poor thief from Grey London who dreams of adventure. An unlikely pairing, but one which must work together to travel between Londons and thwart those trying to bring doom upon both their worlds. The relationship between Kell and Lila forms a large part of the story, and much of the novel’s humour arises from their interactions and the dry way in which they antagonise one another. However, their relationship is not the sole focus of the story – much to the author’s credit. A romance storyline between the two could easily have taken centre stage, and yet this particular element is remarkably downplayed and subtle. Instead it’s more about how Kell and Lila gradually come to trust one another, and how their initially antagonistic relationship becomes something stronger through their mutual desire to put things right and save the worlds. There’s just a hint or two that there may be more than just friendship on the horizon, which is both realistic and lovely at the same time.


No, the true focus of the novel is on its plot rather than its characters; and while I would have liked to have been given more insight into each of the characters as individuals, the author nonetheless does a credible job of developing them both whilst remaining focused on the events. The plot itself is relatively straightforward, but with enough twists and turns thrown in to keep the reader guessing; and the writing is flowing and engaging. In fact certain parts of the prose – not to mention the setting, as well as the somewhat nebulous nature of the magic itself – put me in mind of Susanna Clarke’s excellent novel Jonathan Strange and Mr Norrell. Schwab’s novel is not as accomplished nor as ambitious as Clarke’s behemoth – indeed, A Darker Shade of Magic’s strength is in its fast pacing and tightly-focused plot – but its spirit is much the same, as is its focus on magic’s darker, subtler side and its potential to bring out both the best and the worst in people.


While many aspects of the novel are somewhat dark and sinister (as the title suggests), the story itself is a whole lot of fun. The strong pacing and short chapters – as well as the likeable characters and compelling plot – conspired to make me finish the book in just two sittings, and I’m really happy to have discovered a new author as a result of my shallow over-appreciation of fine cover art. Even better, a look at the author’s website tells me that there’s a sequel due out next year. I’m confident it will be just as good, if not better, than book one . . . I can only cross my fingers and hope it looks just as pretty on my shelf!