Review: 'Harry Potter and the Prisoner of Azkaban' by J.K. Rowling 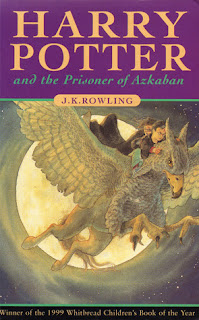 Harry Potter is lucky to reach the age of thirteen, since he has already survived the murderous attacks of the feared Dark Lord on more than one occasion.
But his hopes for a quiet term concentrating on Quidditch are dashed when a maniacal mass-murderer escapes from Azkaban, pursued by the soul-sucking Dementors who guard the prison.
It's assumed that Hogwarts is the safest place for Harry to be. But is it a coincidence that he can feel eyes watching him in the dark, or should he be taking Professor Trelawney's ghoulish predictions seriously?

The Great Harry Potter Re-read continues with book three of the series, Prisoner of Azkaban. Although it’s been years since I last read it, I always remember this book as my least favourite of the series, so I was really surprised when I found myself enjoying it rather a lot. It has all the things I liked about the first two books, such as funky magical creatures, stunning plot twists, and of course Rowling’s trademark humour. Furthermore, some of my favourite characters – namely Sirius and Lupin – make their first appearance here, and I thoroughly enjoyed becoming re-acquainted with the little darlings.
Despite this, I did find myself getting a little impatient with the story, and was often reminded why I previously regarded this as my least favourite of the series. (Yes, Harry, we know you’re not allowed to go to Hogsmeade, now please stop moaning about it. It’s a rat, Ron, for God’s sake get over it. And oh dear God, not another Quidditch match?!?!) I also feel like I was less engaged with the story in general than I was with the first two books: Philosopher’s Stone kept us guessing throughout and was full of questions (who robbed the Gringotts vault? What is Fluffy guarding? Who is Nicholas Flamel?), and Chamber of Secrets was packed with even bigger questions (What is the Chamber of Secrets? Who is the heir of Slytherin? Who or what is petrifying muggle-borns?). Prisoner of Azkaban is the first book in the series to lack a great underlying mystery, and unfortunately this meant that I felt less compelled to keep turning the pages.
That said, there are a lot of things this book does very well, the main one being its depiction of the characters’ emotional growth. We see the first real disagreements between Harry, Ron and Hermione as they each become more headstrong, and their arguments are portrayed as petty yet as realistically serious in that dramatic way unique to young teenagers just starting to hit puberty. Much of the story is about Harry being in emotional turmoil rather than physical danger, and while this doesn’t always make for the most thrilling of reads, it’s nonetheless well done. I think this is the point where the series first starts to mature: there’s a lot more emphasis on personal revelations rather than magic, and it’s the first time we see Harry have to really deal with emotional issues surrounding his own past and the deaths of his parents.
It has to be said that the last few chapters of the book are really fantastic: fast-paced and full of really great revelations and clever plot twists leading to yet another tidily satisfactory conclusion. Best of all, finishing this one means that now the fun really begins: Goblet of Fire next!