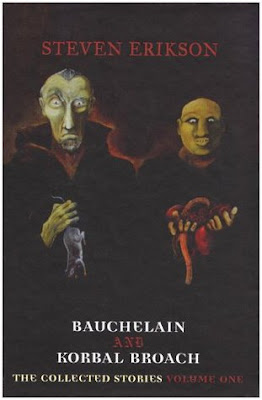 All is not well in Lamentable Moll. A sinister, diabolical killer stalks the port city's narrow, barrow-humped streets, and panic grips the citizens like a fever.

Emancipor Reese is no exception, and indeed, with his legendary ill luck, it's worse for him than for most. Not only was his previous employer the unknown killer's latest victim, but Emancipor is out of work. And, with his dearest wife terminally comfortable with the manner of life to which she asserts she has become accustomed, all other terrors grow limp and pale for poor Emancipor.
But perhaps his luck has finally changed, for two strangers have come to Lamentable Moll... and they have nailed to the centre post in Fishmonger's Round a note requesting the services of a manservant. This is surely a remarkable opportunity for the hapless Emancipor Reese... no matter that the note reeks with death-warded magic; no matter that the barrow ghosts themselves howl with fear every night; and certainly no matter that Lamentable Moll itself is about to erupt in a frenzy of terror-inspired anarchy....
Blood Follows is Steven Erikson’s first Malazan novella, the first in a series detailing the nefarious exploits of necromantic duo Bauchelain and Korbal Broach.
Bauchelain and Broach made their Malazan debut in the third book of the main series, Memories of Ice, in which they played a minor part in a battle outside the city of Capustan. Here we were also introduced to their long-suffering manservant Emancipor Reese, and made to wonder just how ‘’Mancy the Luckless’ came to work for his unnatural employers. Blood Follows answers this question for us in the form of a darkly humorous tale detailing the origins of Reese’s unlucky alliance with Bauchelain and Broach.
Containing all the trademark Erikson features without the weight of a 1,000+ page novel, Blood Follows is a Malazan tale in miniature, a single piece of the colossal jigsaw puzzle that usually comprises the full-length novels. As such it’s a tightly focused, fast-paced and brilliantly self-contained story, set on an obscure island and focusing on a handful of characters and their macabre involvement in a series of grisly murders. For this the setting of Lamentable Moll is perfect: a city whose houses and streets are built around and on top of hundreds of ancient (and occasionally haunted) barrows.
The novella introduces a cast of characters which is relatively small, yet nicely diverse and fleshed-out considering the very short page count. The main players – both of whom are amusing and likeable – are Emancipor Reese, the aforementioned down-on-his-luck worker with an exceedingly demanding wife; and Sergeant Guld, top dog amongst the city watch but currently struggling with the pressure of hunting down a serial-killing sorcerer. As usual Erikson also manages to nudge on from the sidelines several awesomely bizarre supporting characters, some of whom are much more than they first appear; it’s these little touches of weirdness and magic and humour that, for me, really make him stand out as an author. These, and of course his ability to weave an intriguing tale leading to an exciting convergence no matter how limited the length of the story may be.
Blood Follows is a ghoulish, hilarious and thoroughly enjoyable Malazan outing that’s now beckoning me (with a fat, white, delicate hand) to read more of these Bauchelain and Korbal Broach novellas.
5/5
Posted by Unknown at 13:48