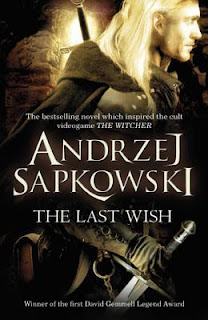 Geralt was always going to stand out, with his white hair and piercing eyes, his cynicism and lack of respect for authority ... but he is far more than a striking-looking man. He's a witcher, with powers that make him a brilliant fighter and a merciless assassin - his targets are the vile fiends that ravage the land.

As guardian of the innocent, Geralt meets incestuous kings with undead daughters, vengeful djinns, shrieking harpies, lovelorn vampires and despondent ghouls. Many are pernicious, some are wicked, and none are quite as they appear.

Geralt of Rivia is a witcher: a man who has suffered through years of gruelling training and exposure to terrible alchemic mutations in order to become a kick-ass monster hunter, complete with white hair and night vision. The original inspiration for the video game series The Witcher, The Last Wish is made up of six short stories, framed by a series of intermissions wherein Geralt recuperates from one of his battles and muses on both the past and the future.

Having already played the console game The Witcher 2: Assassins of Kings  (twice), I enjoyed learning more about the titular character, as well as getting more background knowledge about things referenced in the game, such as how Geralt earned the moniker ‘the Butcher of Blaviken’. One of my favourite aspects of the book was the pervading sense of humour, which is very dry and gives a whole new dimension to the character of Geralt who, in the game, is mostly straight-faced (and, to be honest, a little boring). Book-Geralt is, I’m pleased to say, much more fun to be around.

Despite being the driving influence behind a popular video game series, there is much to distinguish Sapkowski’s world from the myriad other fantasy settings out there. There are no dragons here, no giant spiders or walking skeletons: instead there are rusalkas and kikimoras, strigas and bruxas, djinns and devils. Many of these outlandish beasts – as well as the settings in which their stories take place – are lifted from Slavic mythology, and this Eastern European influence has the wonderful effect of making The Last Wish feel all the more fantastical.

The stories themselves are essentially clever and irreverent subversions of classic fairy tales. This in itself is hardly unique, nor is it the first example of its kind I’ve ever read, but it’s by far the most enjoyable. The original fairy tales themselves, as well as many traditional fantasy tropes, are clearly recognisable yet different, twisted, as though seen through a dark and distorted mirror. Sapkowski’s elves are beautiful and long-lived, yet also narrow-minded, violent and cruel; his priestesses are wise and haughty, but also friendly, helpful and even promiscuous; his kings are corrupt and weak, his princesses are strong and independent, and his great knights are often little more than thugs. Some of his heroes are monsters, and some of his monsters are heroes. Nothing is quite as you expect it to be in Sapkowski’s world, and this sense of the unexpected makes each of the stories a quirky and delightfully unique trip into the unknown.

As with all short story collections, The Last Wish is a bit hit-and-miss, with some stories turning out to be much more enjoyable than others. I particularly liked ‘The Witcher’ and ‘A Grain of Truth’; while others, such as ‘A Question of Price’ and ‘The Edge of the World’, were a bit of a let-down. Despite this, each and every story is written in simple and unassuming prose, which makes for pleasant and easy reading (even if the story itself is occasionally less than captivating). Although some of the stories were considerably less thrilling than others, those I did enjoy I enjoyed immensely, and I look forward to reading more stories set in Sapkowski’s world.