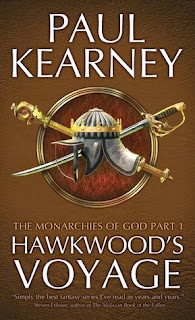 THE WESTERN WORLD IS BURNING...

Even as cities and cathedrals are tumbling, their defenders crucified by the invading Merduks, the Faithful war among themselves, purging heretics and magical folk and adding to the flames.

For Richard Hawkwood and his crew, a desperate venture to carry refugees to the uncharted land across the Great Western Ocean offers the only chance of escape from the Inceptines' pyres. The King's cousin, Lord Murad, has an ancient log book telling of a free, unspoiled land...


Hawkwood’s Voyage is a book I’ve been meaning to read for a long time. Kicking off Paul Kearney’s epic Monarchies of God series, it seems to have often been both praised and criticised across the web solely on the strength of its parallels to historical events. I have to admit that my general knowledge in this area is pretty poor, however, so whilst reading it the only possible influences I was able to recognise were the Spanish Inquisition and the discovery of America. But since I picked up the book as a work of fantasy – and, admittedly, on the strength of the fact that Steven Erikson wrote the cover blurb – these historical allusions went mostly over my head, and I don’t believe that my ignorance in this regard affected my enjoyment of the book in any way.

Kearney sets the very beginning of Hawkwood’s Voyage in the aftermath of a besieged city’s destruction, throwing us into the midst of a dark, gritty, conflicted world. This totally captivated my interest, and also reminded me of the beginning of Erikson’s Gardens of the Moon, which also begins in the wake of a siege and gradually fills in previous events as it goes along. In Kearney’s novel, the kingdoms of Normannia are under attack from the Sultanates of the Eastern Merduks. The great city of Aekir has fallen, and it’s only a matter of time before the rest of Normannia’s defences are breached. However, the defence of the realm against the Merduks is hampered by the power games of the leaders of the Inceptine church, whose influence across Normannia has shackled its secular leaders and instigated brutal pogroms against all foreigners and users of magic.

Meanwhile, in an attempt to resist the Inceptines’ edicts, the King of Hebrion has commissioned a secret voyage to the legendary Western Continent, and two ships filled with arcane refugees now flee a land on the edge of civil war and journey into the unknown. The eponymous voyage is just one storyline amongst several, though it was by far my favourite. Although I didn’t particularly like Hawkwood as a character, I did thoroughly enjoy the tale of his voyage, in particular the elements of horror that suffused it: the ancient ship’s log telling of a dread beast terrorising a previous voyage is brilliantly reminiscent of Dracula, and I wish more page time had been devoted to this storyline to create a better sense of the fear and tension on board the Osprey.

Hawkwood’s Voyage boasts a range of characters, some more interesting than others. There’s Corfe the soldier, a former deserter attempting to redeem himself to his new commander; Richard Hawkwood, a ship’s captain commissioned to undertake a dangerous voyage; Abeleyn, a King made powerless in his own realm by the strictures of the Church; and Bardolin, a powerful mage and scholar. There are also other, more minor POV characters, though the main storylines revolve around these four. Unfortunately I found it difficult to sympathise with some of them: there seemed to me to be a sense of distance from the characters, occasionally heightened by the changing of POV without warning. For instance, one moment we might be viewing a scene through Corfe’s eyes, and the next moment we’ve switched to minor character General Martellus without so much as a page break to mark the change of POV. I’m not sure whether this is deliberate or just careless, but for me it detracted somewhat from any attempt to form a sympathetic bond with certain characters.

Kearney’s writing style is for the most part engaging throughout. However, he does inflict quite a few infodumps on the reader in the form of lengthy descriptions of scenery and history, particularly at the beginning of chapters and upon arriving in a new setting. Although the detail clearly demonstrates the skill and extent of the author’s worldbuilding, the way it is conveyed does tend to slow the pace a bit too much. Similarly an occasional overdose of lengthy dialogue makes Hawkwood’s Voyage a bit dry in places. On the other hand, Kearney does a more than decent job of writing large-scale conflict. His battle scenes are vivid, gritty and well-described (if a touch long-winded at times), not least because he maintains a balance between characters who are in the thick of the fighting and those who have a bird’s-eye view of the conflict. Furthermore, the author’s frequent references to the horrors of war and religious fanaticism – burning people at the stake, attacking an eyeless priest on the roadside, crucifying an enemy general – convey a pervading atmosphere of threat and tension, but not to the extent that it dominates the novel; Kearney certainly doesn’t shy away from depictions of violence, but nor does he dwell on them too much. His writing is gritty without being grimdark, and it suits the tone of the novel perfectly.

It’s obvious that Hawkwood’s Voyage is the start of something huge. Each of its disparate storylines kicks off major events, and though some seem less relevant than others it’s clear that they are all destined to eventually become important parts of the whole. Kearney’s world is geographically detailed and politically complex, and is peopled by characters both heroic and unscrupulous. I can’t wait to read more.