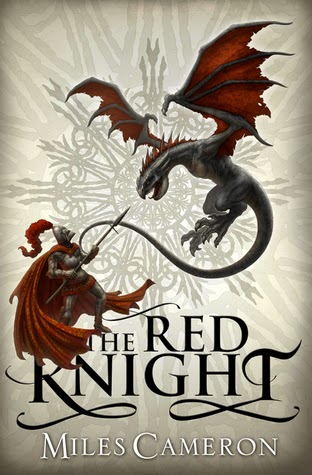 Twenty eight florins a month is a huge price to pay, for a man to stand between you and the Wild.

Twenty eight florins a month is nowhere near enough when a wyvern's jaws snap shut on your helmet in the hot stink of battle, and the beast starts to rip the head from your shoulders. But if standing and fighting is hard, leading a company of men - or worse, a company of mercenaries - against the smart, deadly creatures of the Wild is even harder.

It takes all the advantages of birth, training, and the luck of the devil to do it.

The Red Knight has all three, he has youth on his side, and he's determined to turn a profit. So when he hires his company out to protect an Abbess and her nunnery, it's just another job. The abbey is rich, the nuns are pretty and the monster preying on them is nothing he can't deal with.

The Red Knight has been gathering dust on my shelf for a couple of years now, but I’ve always put off starting it because of how hefty it looks. However, I recently read a bunch of positive stuff about it, and since my reading mojo has been brilliant lately I thought now would be a good time to finally give it a go. I have to say I found it very underwhelming at first – in fact there were several occasions when I almost gave up on it – but it gradually picked up the pace as it went on, to the point where the second half of the book felt almost like a different, far superior book than the first half.

Firstly, it has to be said that The Red Knight is VERY slow in getting off the ground. I struggled a lot with the first hundred pages or so, finding the prose to be somewhat laborious and the descriptions of duels, complete with the names of guards and stances and such, to be pedantic and dull. In fact, the book didn’t really grip me in any way up until the 200 page mark; unfortunately by that point it already felt as though I’d ploughed through closer to 600, and so I didn’t really start to appreciate the book until quite a way after this. (I’m not sure if the fact that my copy is a trade paperback made it feel weightier than it really is.) However, I did start to enjoy it a lot more as the story progressed, and what begins as a slow introduction of multiple threads does build up to quite a climactic convergence towards the end.

The majority of The Red Knight’s story is set during a siege, which takes place over the course of a fortnight. The eponymous Red Knight and his company of mercenaries have been hired by the Abbess of Lissen Carak to provide protection for her nuns and to investigate the violent murders that have been taking place in nearby villages. It quickly becomes apparent that the murders are not isolated incidents: in fact, they herald an imminent invasion of Alba by an enemy host, and the Red Knight must use all his strength and cunning to defend the nuns’ mountain fortress against an incursion by the fearsome creatures of the Wild.

Despite the novel’s title, only around half the story is actually told from the point of view of the Red Knight himself. The rest of the book alternately follows a range of other characters, perhaps ten or eleven in total, in their own individual conflicts which ultimately become different strands of the main story. The regularly shifting POVs are jarring at first, particularly as each and every transition is heralded by the name and location of the next character, almost as though the author doesn’t trust the reader to keep track. There are also a few characters who felt superfluous to the story, such as Peter and Gaston, and I found myself impatient for their segments to end. The Red Knight himself is something of a mystery, and spends much of the novel nameless and faceless, which makes it hard to sympathise with him. However, hints about his identity are leaked gradually enough to keep the reader intrigued, and he becomes much more human and likeable as the main events unfold. As the story progresses and the reader becomes more familiar with the characters, the multiple POVS actually help to enhance the plot-driven story, giving it a cinematic quality so that you can almost visualise a Game of Thrones-style TV adaptation, which isn’t necessarily a bad thing.

The way the author uses multiple points of view to create epic convergences is strongly reminiscent of Steven Erikson’s Malazan Book of the Fallen. However, generally speaking The Red Knight reminded me more of Mark Lawrence’s Broken Empire trilogy in that the main character is more than he first appears, has fallen from high station, and leads a company of morally reprehensible men and women on a quest for glory. There are also clearly influences from the works of Tolkien, and the concept of the ‘Wild folk’ being kept from civilisation by a protective wall has the ring of A Song of Ice and Fire. Despite this, The Red Knight didn’t actually feel too derivative. In fact, what sets it apart from pretty much all other fantasy I’ve read is the fact that the characters fight in head-to-toe armour (or ‘full harness’) in the style of medieval knights, and the author makes a very big deal about this. Somehow the big battles feel all the more realistic when seen from the point of view of characters who have limited vision and are gasping for air due their obstructive helmet visors, and who are hit with multiple swords and arrows during a fight, surviving only because of their heavy armour. And the grim realities of battle are driven home that much harder by showing us thoroughly exhausted knights whose armour is so heavy and restrictive that it requires at least two people to equip and remove it, and whose muscles and joints hurt constantly from bearing its life-saving weight.

Despite the initially confusing multiple points of view, the entire story of The Red Knight actually takes place within a relatively small area of a single country. The author doesn’t feel the need to make vague references to hundreds of obscure places that will never be heard from again, instead concentrating on no more than four or five main locations. This, along with the pleasantly simple map at the beginning, is actually very refreshing. However, there were parts I had difficulty with. I found a lot of the battle scenes to be overcomplicated and confusing, particularly those towards the end of the book; and the way the author swaps out names and noun phrases also occasionally caused me some confusion as to who exactly was doing what, and led to me quite often having to go back and re-read entire paragraphs, especially at the beginning when lots of new characters are being introduced. I also found that there are numerous cases where character or place names are spelt differently throughout the book, sometimes even within the same passage (Sossag/Sassog, Qwethnethog/Qwethenethog/Qwethenog, Emota/Emmota, demon/daemon/deamon, etc.), as well as a surprising amount of general spelling errors, which I find disappointing in a professionally published novel. These inconsistencies and errors continued to repeat themselves throughout the book and became something of a distraction, as did one or two occasionally bizarre descriptive passages (the Queen had “lashes so long that she could sometimes lick them”? Eh?)

To sum up:  I found reading The Red Knight to be something of an uphill struggle, at least for the majority of its first half. Once I’d got the hang of it, I did become suckered in to the story, but I still wouldn’t describe any part of the book to be an easy read. However, The Red Knight compensates for its slow start by being packed with gritty descriptions and bloody action, and has an interesting take on the relationship between religion, magic and the fae. The book has the dubious achievement of seeming twice as long as it actually is, and yet I’m quite interested in seeing how the Traitor Son cycle continues.