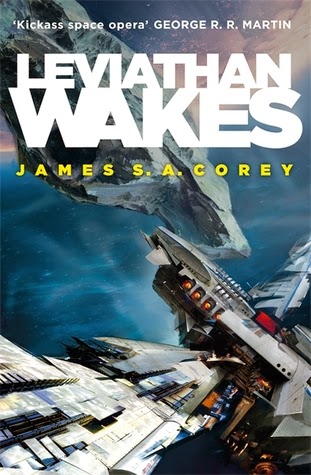 Jim Holden is XO of an ice miner making runs from the rings of Saturn to the mining stations of the Belt. When he and his crew stumble upon a derelict ship, "The Scopuli," they find themselves in possession of a secret they never wanted. A secret that someone is willing to kill for - and kill on a scale unfathomable to Jim and his crew. War is brewing in the system unless he can find out who left the ship and why.

Detective Miller is looking for a girl. One girl in a system of billions, but her parents have money and money talks. When the trail leads him to "The Scopuli" and rebel sympathizer Holden, he realizes that this girl may be the key to everything.

Holden and Miller must thread the needle between the Earth government, the Outer Planet revolutionaries, and secretive corporations - and the odds are against them. But out in the Belt, the rules are different, and one small ship can change the fate of the universe.

For my first ever science fiction reading experience, I have to say I was pleasantly surprised by Leviathan Wakes. I wasn’t sure what to expect – 600 pages of spaceships randomly flying around and making ‘peowm!’ noises? – but it certainly wasn’t a mystery story with horror elements that just happens to be set in space.

Leviathan Wakes introduces us to the futuristic world of The Expanse, a world in which humanity has colonised the Moon, Mars and the Asteroid Belt, and in which the ‘Belters’ are seen as inferior to the ‘Inner Planets’. When a small mining crew accidentally stumbles upon an eerie deserted ship, they find themselves reacting to a series of explosive events as unseen players try to eliminate them in a bid to start a destructive interplanetary war. Meanwhile, a washed up and world-weary security guard on the asteroid of Ceres finds his fate tied with that of the crew, as a seemingly standard investigation begins to turn up clues about a sinister plot that threatens not just the planets but the entire human race.

The story focuses on two central characters: Holden, a dashing young ship captain intent upon protecting his small crew and doing the right thing; and Miller, a fifty-something cynical Detective with a much looser opinion about right and wrong. Both characters are likeable and sympathetic in their own ways, though Miller proved to be the more interesting of the two given his many faults and peculiarities.

For the most part Leviathan Wakes has a pleasantly colloquial and engaging tone, though the prose feels a bit bland at times. This may be the result of two authors sharing the writing, but the inconsistency leaves it feeling slightly rough around the edges. Despite this, the first book in the ongoing Expanse series is an intriguing, character-focused narrative with a minimum of technological bullshit, which I think has made it an excellent choice for my first ever SF read. I’ll definitely be coming back for more, of this series at least.