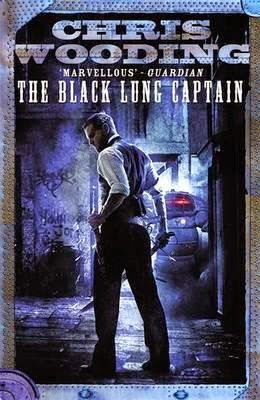 Darian Frey is down on his luck. He can barely keep his squabbling crew fed and his rickety aircraft in the sky. Even the simplest robberies seem to go wrong. It's getting so a man can't make a dishonest living any more.

Enter Captain Grist. He's heard about a crashed aircraft laden with the treasures of a lost civilisation, and he needs Frey's help to get it. There's only one problem. The craft is lying in the trackless heart of a remote island, populated by giant beasts and subhuman monsters.

Dangerous, yes. Suicidal, perhaps. Still, Frey's never let common sense get in the way of a fortune before. But there's something other than treasure on board that aircraft. Something that a lot of important people would kill for. And it's going to take all of Frey's considerable skill at lying, cheating and stealing if he wants to get his hands on it...

It’s been a year since I read the first Ketty Jay novel, Retribution Falls, and to be honest I can barely remember a thing about it. I re-read my own review of the first book before starting The Black Lung Captain to try and refresh my memory, and came away with a vague impression of a fairly enjoyable story but with characters that fell sort of flat. Whether this is in fact true or not, I’m delighted to say that whatever misgivings I had about the first book, I thought the second one was bloody fantastic.

The Black Lung Captain immediately re-introduces us to the crew of the Ketty Jay doing what they do best: exhibiting a collective lack of morality whilst bumbling through a failed money-making mission, in this case being chased by an angry horde after robbing an orphanage. The book starts with a bang – an incredibly funny one – and continues in pretty much the same vein for the rest of the book. It’s action-packed and very fast-paced, and there is a lot of hopping about from place to place, as you might expect from a book about an airship crew. There are always good reasons for them to head to these places – usually because they’re either chasing something or running away from someone – and it keeps the story lively and the reader on their toes. The Black Lung Captain is also packed full of kickass aerial battles. Wooding never seems to run out of spectacular settings for them, whether it’s the middle of a thunderstorm on a pitch black night, or beneath a supernatural maelstrom in cloudy, frozen skies. With each battle you can virtually see the flash of the guns and hear the bullets ricochet off the ships, and it makes for a continually exciting read.

The thing that really makes The Black Lung Captain really come to life is the characters themselves, namely the crew of the Ketty Jay. Each and every member of the crew gets the page time they need to round them out and help the reader get to know them better, and there wasn’t a single character I disliked reading about – which is ironic, given that my main criticism of the first book was that the characters were two-dimensional. The author uses regularly shifting POVs within chapters, choosing to show events through the alternating viewpoints of the five or six main characters. This frequently provides levity in the midst of otherwise serious situations, usually due to the incongruity between many of the characters’ outlooks: for instance, during a dogfight with the enemy, the POV often shifts back and forth between shell-shocked, gibbering veteran Harkins, who is terrified of fighting, to the youthful daredevil Pinn, who is described as having no fear of death since he lacks the imagination to conceive of it. The shifting POVs are used to even better effect in depicting the rivalry between Harkins and Slag, the fearsome cat who dwells aboard the Ketty Jay. However, it’s Frey’s segments that pull the whole thing together and drive the plot forward, which is rather fitting seeing as he’s the one in charge. The unscrupulous, down-on-his-luck captain becomes something more than just a loveable rogue here, and his character arc is both rewarding and immensely entertaining.

Another real strength of The Black Lung Captain is in the interactions between the crew: they bicker and argue and sometimes don’t speak at all, and when they do it sounds coarse and sometimes unfriendly. But there’s also the casual and hilarious friendly banter, the gentle jibes, and the occasional rough and affectionate hug. Some lines actually had me laughing out loud, while there were also moments that almost had me in tears (there was one moment in particular involving Crake, who is also, incidentally, my favourite character). It’s realistic and funny and moving, and the relationship between Frey and his crew is pretty much the focus of the novel just as much as the events of the main plot are.

There’s not much more to say about this book. I loved the story, I loved the characters more, and I’m now officially in love with this series.

Also, when I grow up I want to be a Century Knight.