Review: 'Before They Are Hanged' by Joe Abercrombie

Superior Glokta has a problem. How do you defend a city surrounded by enemies and riddled with traitors, when your allies can by no means be trusted, and your predecessor vanished without a trace? It’s enough to make a torturer want to run – if he could even walk without a stick. 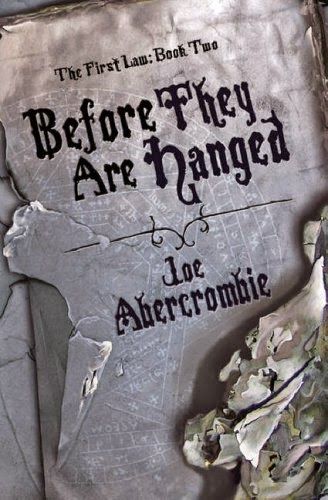 Northmen have spilled over the border of Angland and are spreading fire and death across the frozen country. Crown Prince Ladisla is poised to drive them back and win undying glory. There is only one problem – he commands the worst-armed, worst-trained, worst-led army in the world.

And Bayaz, the First of the Magi, is leading a party of bold adventurers on a perilous mission through the ruins of the past. The most hated woman in the South, the most feared man in the North, and the most selfish boy in the Union make a strange alliance, but a deadly one. They might even stand a chance of saving mankind from the Eaters. If they didn’t hate each other quite so much.

Ancient secrets will be uncovered. Bloody battles will be won and lost. Bitter enemies will be forgiven – but not before they are hanged.

There’s a pattern emerging here. Last year I read Half a King, the first book in Joe’s YA Shattered Sea trilogy, and it prompted me to re-read The Blade Itself, which was the first book in his First Law grimdark fantasy trilogy. I recently read the second Shattered Sea novel, Half the World, and once again there immediately followed an urge to return to the First Law trilogy.

Before They Are Hanged follows the events of The Blade Itself and continues storylines carefully set up in the first novel. All of the major characters from The Blade Itself return here, and leap off the page just as much as they did in the first book. Cynical Inquisitor Glokta and optimistic Logen Ninefingers in particular continue to stand out, with their beloved idioms and now-familiar catchphrases making the book feel like a reunion with old friends. It’s Joe’s ability to create vivid and unique voices for each of his characters that really makes his First Law books stand out, not only in the characters’ internal monologues but also in the flowing and fantastic dialogue. In fact, it’s almost shocking when you realise how much of the novel is comprised of just dialogue . . . and yet it never gets boring. I said in my review of The Blade Itself that it was easy to overlook the fact that there isn’t all that much actually happening, because the character-focused narrative and gripping internal monologues keep the pace flowing smoothly; and the same is also true of Before They Are Hanged.

In this second instalment of the First Law trilogy, our characters are spread far and wide across the known world. Glokta is investigating the disappearance of an Inquisition representative in the besieged city of Dagoska in the South; West is on campaign against the wild men of the North; and Bayaz, Jezal, Logen and Ferro have set out on a mysterious quest to the edge of the World to find a long-lost relic of enormous power. This means, of course, that the events here are on a larger scale than those of the first book; and yet the consistent focus on a small handful of characters gives the book a curiously intimate feel. The characters themselves develop much more noticeably here, and it’s fascinating to see them change in often unexpected ways, in keeping with the darkly cynical tone of the series. Joe is a master at pulling the rug from beneath the reader in terms of our expectations of both characters and events, and Before They Are Hanged is no exception.