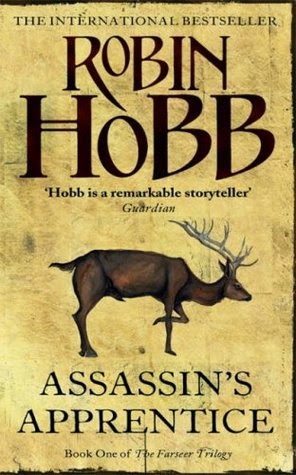 In a faraway land where members of the royal family are named for the virtues they embody, one young boy will become a walking enigma.

Born on the wrong side of the sheets, Fitz, son of Chivalry Farseer, is a royal bastard, cast out into the world, friendless and lonely. Only his magical link with animals - the old art known as the Wit - gives him solace and companionship. But the Wit, if used too often, is a perilous magic, and one abhorred by the nobility.

So when Fitz is finally adopted into the royal household, he must give up his old ways and embrace a new life of weaponry, scribing, courtly manners; and how to kill a man secretly, as he trains to become a royal assassin.

I first read Robin Hobb’s Farseer trilogy about eight years ago, so my memories of it are muzzy to say the least. The only thing I could remember about it was that the first two books were quite good, while the third was okay. I never had the urge to revisit the characters, or to read any of her other books. But I’ve been on a bit of a re-reading spree recently, and came across the trilogy whilst sweeping my bookshelves looking for candidates for my next read. And after finishing Assassin’s Apprentice for the second time, I officially revise my initial impression of the book, and can’t believe I’ve let this series sit and gather dust for so many years without wanting to read more.

The Farseer trilogy is so-called after the royal family of the Six Duchies. The Farseers have ruled for hundreds of years, and are unique amongst the kingdom in that they possess the Skill, a hereditary ability that allows them to initiate mind contact and manipulate others for their own purposes. Used for the most part in the defence of the kingdom against pirate raiders, the Skill is both feared and respected, and is believed to be solely the province of royalty and those of otherwise noble birth. But if the Skill is considered as one side of a coin, then on the other side of the coin is the Wit: the ability to communicate with animals. Unlike the Skill, the Wit is reviled, with those who possess it considered to be perverted or tainted in some way. Anyone with the Wit foolish enough to make it publicly known is promptly lynched by neighbours who believe them no better than the animals with which they share their thoughts and feelings.

FitzChivalry Farseer has both the Wit and the Skill. But as a bastard of the royal line, he is considered unworthy of the Skill by many. Furthermore, he must keep his Wit hidden from all or else face disgracing the house of Farseer and seeing himself horrifically punished. Fitz is first brought to the royal Keep when he is six years old, and Assassin’s Apprentice details his growth throughout the next ten or so years. Fitz is trained as a – you guessed it – assassin’s apprentice, but he is also trained by others in the arts of swordplay, Skilling, scribing, and the mastery of horses and hounds. But despite his achievements, almost no one - including himself – can see beyond his shameful illegitimacy, which almost proves fatal on several occasions.

The entire focus of Assassin’s Apprentice is on the main character, Fitz, and one particular aspect that makes him so captivating is the sheer amount of conflict surrounding him. Fitz is training to be a loyal assassin, yet is unable to ignore his own sense of morality. He desperately wants to learn the Skill, but despises the cruel man who is teaching him. And he struggles to understand how he should feel about his father’s eccentric but well-meaning widow, Patience, who was responsible for his father’s decision to abdicate his claim to the throne and retire from the castle after first learning of Fitz’s existence. Perhaps the most defining of them all is his ongoing conflict with the stablemaster Burrich, who loves Fitz like a son and yet is repulsed by his use of the Wit to the point where he will no longer speak to Fitz at all. Hobb makes us genuinely care about Fitz and his relationships with those around him, both good and bad, so that his mind-contact with his new puppy is just as exciting to read about as his altercations with his enemies.

But not everything is as positive or rewarding as his bond with the animals: there are plenty of harsh challenges for Fitz, with many sad moments and passages that are genuinely moving. I found these parts of the story to be both emotionally draining and satisfyingly cathartic (in a good way), and am not ashamed to say I was actually reduced to tears on more than one occasion. Then there’s the assorted cast of truly reprehensible antagonists, in particular Galen and Regal, at whom my mind would boo and hiss whenever they appeared on the page. Seriously, they both made me furious. And that’s not even mentioning the true baddies of the story, who are currently operating in the background. The Red Ship Raiders are a constant threat to the coastal villages of the Six Duchies, and the ‘Forged ones’ - vicious zombie-like beings who are all that remain of the Raiders’ victims – make them chilling adversaries.

Both the plot and the characters are well-rounded and captivating, as is the setting and worldbuilding, but the novel’s main strength is its narrative voice. It has a consistently pleasant, engaging tone that makes it a joy to read from beginning to end, and the flowing, almost poetic voice makes the narrative feel light and effortless. The focused first-person narrative brings to the fore a likeable and very sympathetic main character; one who is conscious of telling his own story, yet who is at the same time brutally honest, choosing to include all the damning facts about himself and his own actions. I’ve no idea why I didn’t get along with this series and its protagonist when I first read it all those years ago, but now I can’t wait to devour the rest of the books in Hobb’s Elderlings sequence.