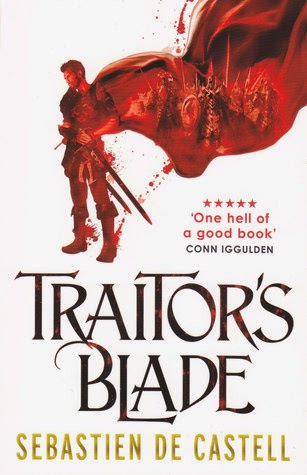 Falcio is the first Cantor of the Greatcoats. Trained in the fighting arts and the laws of Tristia, the Greatcoats are travelling Magisters upholding King’s Law. They are heroes. Or at least they were, until they stood aside while the Dukes took the kingdom, and impaled their King’s head on a spike.

Now Tristia is on the verge of collapse and the barbarians are sniffing at the borders. The Dukes bring chaos to the land, while the Greatcoats are scattered far and wide, reviled as traitors, their legendary coats in tatters.

All they have left are the promises they made to King Paelis, to carry out one final mission. But if they have any hope of fulfilling the King’s dream, the divided Greatcoats must reunite, or they will also have to stand aside as they watch their world burn…

Traitor’s Blade is the first in the Greatcoats series by debut author Sebastien de Castell, and is the sort of novel that has undoubtedly been described by someone, somewhere, as either a ‘rollicking adventure’ or a ‘ripping yarn’. Possibly both. The story follows Falcio val Mond, formerly First Cantor of the esteemed Greatcoats, as he struggles to uphold justice in the corrupt land that killed his King and censured the Greatcoats. Along with his stalwart companions Kest and Brasti, he has spent the five years since the king’s death eking out an ignoble living as a lowly caravan guard. When their client is brutally killed and the Greatcoats framed for his murder, these three musketeers Greatcoats must first run for their lives before attempting to seek out and bring justice to those responsible. However, Tristia’s corruption runs deep, and it seems that this time Falcio may be just a little bit out of his depth.

I had a lot of fun with Traitor’s Blade. The first-person narrator is humorous and likeable, and I particularly enjoyed the banter between Falcio and his companions: for the most part it’s witty and gentle, and seems natural rather than forced. The plot is solid and relatively tight, and the pacing is strong and fast; and although the main story is peppered with flashbacks, these are surprisingly not annoying in the slightest. The flashbacks are always brief and relevant to the immediate events of the story, and in no way intrude upon or detract from the main events. Refreshingly, the tone is relatively light-hearted throughout, although Castell shows he’s not afraid to delve into murkier waters with a few dark scenes that make for somewhat difficult reading.

The book is by no means perfect. Beneath its likeable heroes and shiny veneer, Traitor’s Blade is riddled with clichés: we have noble outcasts, scheming Dukes, and evil villains (with at least one scene featuring the latter somewhat ill-advisedly revealing their diabolical plans to the captured hero), not to mention an obligatory torture scene, tragically murdered wife and ongoing quest for vengeance. And although I know it’s ridiculous to cry ‘unbelievable’ at a work of fantasy, there are also a few ‘yeah, right!’ moments: for instance, what are the chances of our heroes just happening to arrive at their destination as the city’s equivalent of The Purge is about to take place? And, lastly, I was a bit disappointed that I managed to correctly figure out three of the four major plot twists relatively early on in the story.

Griping aside, I found Traitor’s Blade to be a highly enjoyable and fast-paced read, with a focused plot and a protagonist I could really get behind.  Even better, the ending is perfectly set up for the events of the sequel, which just happens to be released next week.