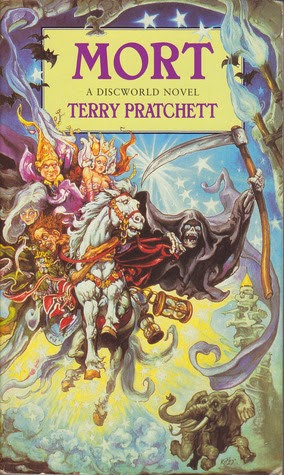 Death comes to us all. When he came to Mort, he offered him a job.

After being assured that being dead was not compulsory, Mort accepted. However, he soon found that romantic longings did not mix easily with the responsibilities of being Death's apprentice...

Mort is the teenage son of a vineyard owner, but has “about the same talent for horticulture that you would find in a dead starfish.” As a result, one day his despairing father takes him down to the local market to fob him off as an apprentice. Luckily, Death has an opening, and shows up on the stroke of midnight on his white horse (named Binky) to collect his new student and begin showing him the ropes. When Mort’s first solo job goes spectacularly wrong, he must find a way to set things right . . . before history itself is destroyed forever.

I thoroughly enjoyed this Discworld outing, more so than any of the previous three books in the series. The plot feels much more focused and coherent, as though Pratchett actually planned it out from the beginning rather than just making it up as he went along. The main characters – Mort, Ysabell, Cutwell, Albert and Death – are all vivid and likeable, and the settings are nicely varied and three-dimensional. In particular we get our first proper look at Death’s abode, which contains every shade of black on the spectrum, has a scythe in the umbrella stand, and is rather heavy on the skull-and-bones motif. However, it also has a carp pond, a stable, and a kitchen, where the butler Albert deep-fries all his food into submission.

Mort is the first Discworld book in which Death features as a major character, and gives us our first real glimpse of this strangely sympathetic and endearing black-hooded, scythe-wielding creature. Yes, he’s a skeleton; yes, he reaps souls for a living; and yes, he has no comprehension of fairness or injustice (there is only ‘The Duty’). And yet we’re quickly made to feel a huge amount of sympathy for the creature who hasn’t had a night off in two thousand years, has never been invited to a party, and gets majorly upset about people drowning kittens. Death has his own major storyline in the book: while Mort is running around trying to correct his mistakes, Death is on a personal quest to learn what it is to be human, and the result is a delightful sort of tragic-comic series of events.

Pratchett is a master of the absurd, and Mort shows off how wonderfully adept he is at creating hilariously incongruous situations, mostly involving Death. The Great Leveller finds himself doing the conga at a party in an attempt to understand the concept of ‘fun’; he tries to get drunk at a bar; he goes looking for a new job (“something nice involving flowers or cats”); he tries his hand at fly-fishing (his ‘fly’ is sharp-toothed and demonic, and dives into the water to forcibly drag the fish out); and of course he takes Mort out for a hearty welcome meal (preceded by the awesome line “I don’t know about you, but I could murder a curry”).

The fourth entry in the Discworld series, and my favourite so far, Mort is fast-paced, funny and satisfying. Highly recommended for Pratchett fans, and also yet another possible entry point into the series.

RIP, Sir Terry, and thank you for blessing us with your amazing sense of humour (and so many Discworld books). Non Timetis Messor.
Posted by Unknown at 12:31