Review: 'A Darkness at Sethanon' by Raymond E. Feist 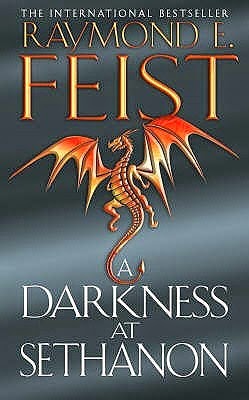 The battle may be over, but war is coming…

The Kingdom forces may have won the first conflict but the enemy has a strong grip on Midkemia and invasion now seems inevitable.

Arutha travels north to confront the Dark Elves, but without help, Pug knows that Arutha’s forces face slaughter. With Tomas he must scour the world – and beyond – to find the one person with enough power to give them a chance.

If they fail, Midkemia will be the first of many worlds to fall to a madman with the power to dominate death itself…

A Darkness at Sethanon concludes the Riftwar Saga, the trilogy of epic fantasy novels that began with Magician and continued with Silverthorn. Thankfully, Feist steps things back up a notch here after the rather poor showing of Silverthorn, and the result is a pleasantly fast-paced and suitably epic conclusion to the first series within the Riftwar Cycle.

The Kingdom of the Isles is once again assailed by the dark forces of Murmandamus, who is intent on annihilating anyone who stands in the way of his march to Sethanon. Prince Arutha and his companions lead the resistance against Murmandamus, while Pug and Tomas are forced to breach the boundaries of space and time in search of the one man who can help them defeat the forces of evil. Set almost a year after the events of Silverthorn, A Darkness at Sethanon continues storylines set in motion by the previous book, concluding them in a more-or-less satisfactory way.

As with many of Feist’s other Riftwar books, A Darkness at Sethanon isn’t terribly original. For instance, amongst the ‘good guys’ we have magicians, elves, dwarves and dragons, whilst the ‘bad guys’ are mainly composed of dark elves, goblins, trolls and snake priests. The bad guys are in search of an all-powerful magical McGuffin known as the Lifestone, which will destroy the world if it falls into the wrong hands. Not for the first time, I found myself likening the series to the multitude of D&D games based on the Forgotten Realms; and while this in itself isn’t necessarily a bad thing, it does unfortunately mean that the word ‘derivative’ remained in the back of my mind throughout the duration of the novel.

Despite this, the final instalment of the Riftwar Saga remains an enjoyable read. A Darkness at Sethanon has a much more epic feel than its predecessor: there are a lot more ambitious battles and exciting sieges, and a lot less travelling around on horseback, with is definitely an improvement. In fact, A Darkness at Sethanon feels more like the ‘true’ sequel to Magician, with Silverthorn as nothing more than a blip in between. It hints towards world building of a grand scale previously only hinted at in Magician and featuring only superficially in Silverthorn, and although it goes into a huge amount of depth with regards to lore and history we still get the feeling of barely scratching the surface, and of even greater things to come.

The book isn’t perfect, and there are plenty of things to gripe about, but I’m only going to mention one more, and that’s the cheesy, exaggerated ‘happily ever after’ conclusion that characterises many of Feist’s earlier novels. You know the type: royal rewards being dished out left, right and centre, back-slapping all around, every wrong righted, happy endings galore, etc. While it’s a nice change from a lot of the grimdark around at the moment, nonetheless the pure cheesiness of it all does tend to grate somewhat.

Nonetheless, I was pleasantly surprised by Feist’s return to form in A Darkness at Sethanon, and am mightily excited to now be able to move on to his Empire trilogy. I just hope it’s as awesome as I remember . . .