Review: 'The Alchemist of Souls' by Anne Lyle 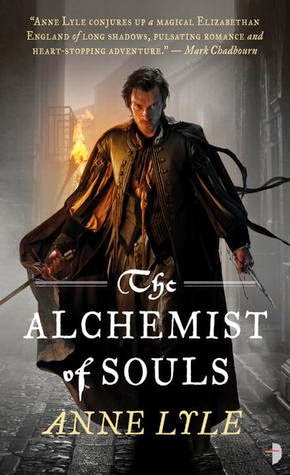 When Tudor explorers returned from the New World, they brought back a name out of half-forgotten Viking legend: skraylings. Red-sailed ships followed in the explorers’ wake, bringing Native American goods--and a skrayling ambassador--to London. But what do these seemingly magical beings really want in Elizabeth I’s capital?

Mal Catlyn, a down-at-heel swordsman, is seconded to the ambassador's bodyguard, but assassination attempts are the least of his problems. What he learns about the skraylings and their unholy powers could cost England her new ally--and Mal his soul.

Anne Lyle’s debut novel, The Alchemist of Souls, is an intriguing mix of magic, drama, espionage, swordplay and politics set against a backdrop of Elizabethan England. I’ll be honest, this first book in the Night’s Masque trilogy isn’t spectacular in itself, but it does introduce a whole lot of interesting concepts and events, and hints at better things to come later in the series.

I usually prefer my reading to be ‘strict’ fantasy rather than historical. However, in this case I feel like the setting and time period create the perfect set-up and atmosphere for the story, and I particularly enjoyed the focus on the Elizabethan theatre and the references to figures such as Shakespeare and Marlowe. The sub-plot about the contest of plays, along with its accompanying mix of rivalry, jealousy and sabotage, was one of my favourite aspects of the book.

With regards to the main plot, I found it fairly fast-paced and entertaining, though it went in a slightly different direction than I’d anticipated. I’d expected quite a heavy focus on espionage as Mal learned the tricks of the trade, but this aspect of the story was somewhat surprisingly side-lined. However, I enjoyed the undercurrent of conflict between the humans and the skraylings, and felt that the author did a really nice job of interweaving each aspect of the storyline with the historical setting: the inclusion of real people and places gave great depth and realism to an otherwise fantastical tale.

However, I found the explanation of Mal and Sandy’s connection to the skraylings a bit confusing, and couldn’t seem to get my head around the time-frames relating to this aspect of the storyline. I also found the climax a little bit chaotic, and felt that the story lost some of its impetus as a result of the pacing and sequencing of events towards the end. Similarly I thought that the Mal/Sandy/Kiiren storyline was concluded somewhat hurriedly and unsatisfactorily. Neither did I really connect with any of the main characters as much as I would have liked, and although I quite liked Mal and Ned I didn’t really engage with much of Coby’s story at all. Theoretically she is one of the more interesting characters: a woman from another country disguising herself as a boy working for a theatre company in Elizabethan England (Shakespeare would have been proud), but for some reason I just couldn’t bring myself to care overmuch.

Despite this, Lyle does a great job in weaving relationships between certain characters; and the sexual dynamics between many of them – Mal and Coby, Ned and Gabriel, Mal and Ned – are made much more interesting given the historical backdrop and its restrictions against both pre-marital and homosexual relations. I also really like the fact that the author creates lots of potential for the sequels without leaving us on a cliffhanger: I own all three books in this trilogy and look forward to seeing what Mal gets up to next.