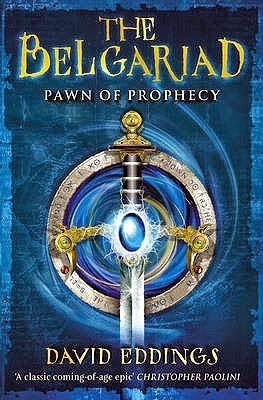 Long ago, the evil God Torak fought a war to obtain an object of immense power - the Orb of Aldur. But Torak was defeated and the Orb reclaimed by Belgarath the sorcerer.

Garion, a young farm lad, loves the story when he first hears it from the old storyteller. But it has nothing to do with him. Or does it? For the stories also tell of a prophecy that must be fulfilled - a destiny handed down through the generations.

I have to admit that I struggle a bit when reading 'classic' fantasy. The reason for this is probably my age: I've (more or less) become familiar with the genre by reading 'modern' fantasy, which is influenced heavily by the likes of Tolkien, and Gemmell, and Eddings. This means that when I read a book like Pawn of Prophecy, I can't help but read certain parts of story (such as a huge man who transforms into a bear, a farmboy torn away from his home and forced into an adventure, a mysterious magical object, and a wise old man who is more than he first appears) and think 'oh, dear, how derivative'. When, in fact, these guys wrote about this stuff before everyone else did. They created these tropes in the first place; they made them fashionable, and it's only now that they've become, to varying extents, cliched.

There is a fair bit of this book that was clearly influenced by Tolkien, but there's much more of it that seemed familiar because I've read it in more recent books. The epic journey, the motley companions, the young boy who discovers that he's actually rather special, the evil God bent on ruling the world . . . It's all traditional, classic stuff. And there's nothing wrong with that. (That is, in fact, the reason I've been enjoying Daniel Abraham's Dagger and Coin series so much - he draws on such traditional plot points in a nostalgic sort of way, but mixes them up just enough to keep in interesting and entertaining.)

However, what is less impressive is that there isn't much of a real plot going on here. I realise it's the first book in a series, and the entire book has obviously been spent setting up for the rest of this series, but that doesn't make the constant repetition (travel to a town, stay at an inn, have some cryptic conversations; travel to a town, stay at an inn . . . rinse, repeat, etc.) any less of a chore to read. There hasn't been a lot to really grip me, and I felt like I was reading the same bit again and again every time I picked up the book.

However, I did rather like the characters. The main character - the boy Garion - is fairly likeable, and the author has done well with writing credibly from the point of view of a child with a nice mixture of ignorance, curiosity, and simplicity. The other character I really liked was Silk, who is more of a minor character; the author does a nice job with the supporting cast, giving them enough personality to make us care about them and prevent them from fading into the background.

It's also good to see how well Eddings has built his world: we have maps (which, while often criticised as yet another cliche of the genre, I actually feel give an extra dimension to the story), we have politics, we have history, and we have economics. And, even better, it's not thrown in our faces: it's just there, giving the story a sense of reality, which is exactly how it should be.

There's certainly a sense of where the overall story began, and where it's going to end. This, along with the sympathetic characters and the easy and simple (if occasionally flat) writing style, is the reason I'll probably give the second book in the series a try at some point, despite not rating this one particularly highly.