‘Tough Travelling’ is a weekly feature: every Thursday (hopefully!) I’ll be rummaging around in my memory to come up with various examples of commonly used fantasy tropes. Full credit goes to Nathan of Fantasy Review Barn for coming up with the idea: be sure to check out his blog!

This week the theme is ‘Dark Ladies’, which is a bit tricky. In fantasy fiction you can’t swing a cat without hitting a famous Dark Lord: Voldemort, Sauron, Saruman, Dracula, Darth Vader, Rumpelstiltskin, and even Satan. Dark ladies, however, are not quite as prevalent throughout the genre as Dark Lords, although they do seem to have begun appearing more widely in the last decade or so.

I’ve taken ‘Dark Ladies’ to embody female characters who hatch ‘wicked’ plots, possess some sort of dark magical power, and/or whose actions deliberately cause harm to others. With that in mind, the list begins with: 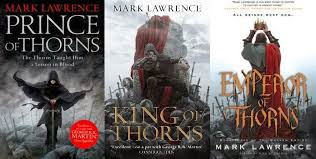 Chella is a necromancer, and one of the main antagonists in Mark Lawrence’s Broken Empire trilogy. She’s beautiful, seductive and cruel, and has the ability to raise entire armies from the dead: an ability she uses to terrifying effect in all three books.

(Prince of Fools by Mark Lawrence)

I had to mention Lawrence again here. We know virtually nothing about the Silent Sister, other than that she is a creepy, mysterious and powerful crone. We know that she is probably directly responsible for the horrific deaths of hundreds, if not thousands, of people, and that she changed the lives of protagonists Jalan and Snorri with one single curse.

I’ve only read the first book in this series (Control Point) and so don’t know much about Scylla, other than that she is merciless and possesses a destructive power which has thoroughly corrupted her. Her power is terrifying, and she is made even more fearful by the fact that she is kept in confinement: the first couple of times we meet her are through the bars of her prison, and her guards are afraid of her even when she is fully incarcerated. Furthermore, she has big plans for the world, and though her ideals are somewhat admirable, her methods are utterly reprehensible.

I haven’t read this series for a very long time, but from what I remember the Emerald Queen was very much a Dark Lady. Mysterious and powerful, she is seeking a magical artefact that has the potential to destroy worlds. She is ruthless and cunning, commands huge armies and is bent on the destruction of Midkemia.

(The Black Company by Glen Cook)

Again, it’s a very long time since I read anything by Glen Cook, but I remember enough to know that the Lady is about as dark as they come. She was the head of a tyrannical empire before being imprisoned, and is later released to unleash her darkness once more. She betrays her husband and fellow tyrant by leaving him buried, murders her own sister, and rules a dark army led by ten foul generals known as the Taken. The ultimate Dark Lady? Perhaps.

Others who deserve a mention are:

That’s it for this week! Happy travelling!
Posted by Unknown at 15:36