As it moves towards a seemingly inevitable collision with a malevolent red star, the Discworld has only one possible saviour.  Unfortunately, this happens to be the singularly inept and cowardly wizard called Rincewind, who was last seen falling off the edge of the world... 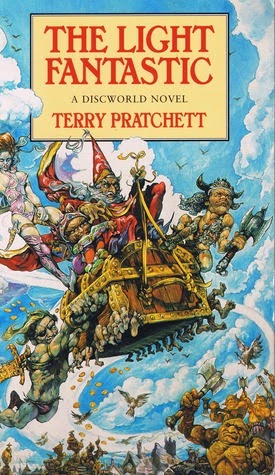 It’s difficult to talk about the second Discworld novel without comparing it to the first, which I recently re-read and which left me somewhat disappointed. It’s been a long time since I read either book and so I had somewhat low expectations of this one too; but I have to say, I found The Light Fantastic to be a whole lot more enjoyable than The Colour of Magic. For one thing, there’s an actual plot. For another, the main character actually develops as the story progresses. And for another, the secondary characters are a lot more fleshed out and a lot more likeable. The world is also a lot better realised and I found it much easier to follow the characters’ journey in my mind’s eye, unlike the first book in which they were jumping about here there and everywhere.

I’ll start with the story. As we learned in The Colour of Magic, Rincewind is a failed wizard who, as a result of an unfortunate series of events, is stuck at the wrong end of the Discworld with a naïve tourist named Twoflower, a sentient luggage case, and one of the Eight Great Spells lodged in his brain. Now, the entire Discworld is in danger from a rapidly approaching Red Star, and Rincewind must return to Ankh-Morpork with the eighth spell in order to avert the end of the world. Along the way he and Twoflower acquire several companions: Cohen the Barbarian, who is eighty-seven (or “eighty-sheven”) and has no teeth; Bethan, the beautiful former druid sacrifice; and Lackjaw, a dwarven jeweller. They must overcome obstacles and defeat rivals such as Herrena, the female Hero; and the main antagonist of the story, Trymon the wizard, who, thanks to the TV adaptation, I now can’t help but picture as the delightfully villainous Tim Curry.

As with the previous novel, the author’s dry humour and satiric tone saturates every page, but is toned down quite a lot here. Whereas The Colour of Magic used a sledgehammer to poke fun at the genre, The Light Fantastic is more of a toffee hammer, and Pratchett’s affectionate mockery of fantasy is a lot less ‘in your face’. I also found that there are a lot more snort-out-loud moments, usually at the author’s hilarious and sometimes outrageous use of puns, something which is now a characteristic staple of his writing. I can’t help but include an example:

‘Rincewind, all the shops have been smashed open. There was a whole bunch of people across the street helping themselves to musical instruments, can you believe that?’
‘Yeah,’ said Rincewind, picking up a knife and testing its blade thoughtfully. ‘Luters, I expect.’

Another feature of Pratchett’s writing which begins to really come to life in The Light Fantastic is his use of humorous personification, and not only relating to characters such as Death and the Luggage. Here’s how he describes Rincewind’s reaction when he finds out that another character might be dead:

‘Dead?’ said Rincewind. In the debating chamber of his mind a dozen emotions got to their feet and started shouting. Relief was in full spate when Shock cut in on a point of order and then Bewilderment, Terror and Loss started a fight which was ended only when Shame slunk in from next door to see what all the row was about.

It’s bits like this throughout the book that enable the author to explore how Rincewind has developed as a result of his relationship with Twoflower without losing any levity or detracting from the events at hand. In this way he also keeps the pace of the novel flowing quickly and smoothly, and as a result The Light Fantastic makes for a relatively fast and pleasant read. I’d probably recommend this as a starting point for the series, as it’s far superior to The Colour of Magic, and there really isn’t that much from the first novel that couldn’t be picked up from reading this.