Review: 'The Colour of Magic' by Terry Pratchett 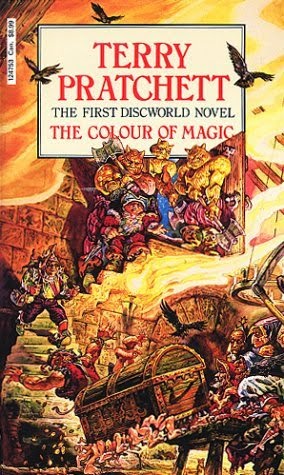 On a world supported on the back of a giant turtle (sex unknown), a gleeful, explosive, wickedly eccentric expedition sets out. There's an avaricious but inept wizard, a naive tourist whose luggage moves on hundreds of dear little legs, dragons who only exist if you believe in them, and of course THE EDGE of the planet...

The Colour of Magic is the first book in Terry Pratchett’s Discworld, a series currently comprised of around 40 novels and still going strong. The series is fantastic and well worth looking into for any fans of fantasy; however, I’d recommend starting somewhere other than the beginning, as The Colour of Magic is unfortunately not one of its strongest instalments.

The book introduces two of the most important recurring characters of the series: Rincewind, the Discworld’s worst wizard; and Death, a tall, skeletal, black-robed figure . . . who rides a horse named Binky. The book’s mad events are set in motion by the arrival of Twoflower, the Discworld’s first ever tourist (or ‘looker’), to the city of Ankh-Morpork, where Rincewind is coerced into being his guide for the duration of his stay in the city. Of course, things don’t go to plan, and the pair are forced to flee Ankh-Morpork under disastrous circumstances. After this they travel far and wide, encountering numerous perils and fantasy stereotypes under entirely arbitrary conditions.

I have to say that, for a book that is over 30 years old, The Colour of Magic stands the test of time fairly well. Pratchett wrote this loving mockery of fantasy stereotypes decades before such tropes were even considered well-worn, and much of his ironic commentary on dragonriders, magic, gods and the like is still relevant to a huge chunk of so-called ‘modern’ fantasy today. However, much of the plot is nonsensical (and not in a good way), there’s no real sense of direction, and the characters are somewhat two-dimensional; it feels almost as though Pratchett is more preoccupied with cramming in as many caricatures as possible, and less bothered about building or developing the characters of our heroes in any way.

I think, if I were a newcomer to the series and had started with The Colour of Magic, I might not bother with the rest. However, having read several of the series’ stronger instalments and hidden gems makes it a little easier to overlook the less-than-brilliant outings into the Discworld. The Discworld series is, I’ve always found, spectacularly hit-and-miss; and while The Colour of Magic is a lot more ‘miss’ than ‘hit’, you have to remember that it was the first of its kind to really use fantasy satire to create an original story. It’s not fantastic, but it’s a short, fun read, and is absolutely, undeniably unique.