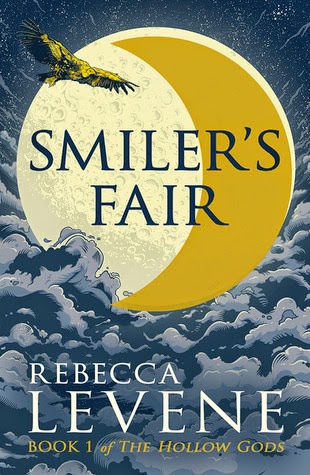 Smiler's Fair: the great moving carnival where any pleasure can be had, if you're willing to pay the price. They say all paths cross at Smiler's Fair. They say it'll change your life. For five people, Smiler's Fair will change everything.

In a land where unimaginable horror lurks in the shadows, where the very sun and moon are at war, five people - Nethmi, the orphaned daughter of a murdered nobleman, who in desperation commits an act that will haunt her forever. Dae Hyo, the skilled warrior, who discovers that a lifetime of bravery cannot make up for a single mistake. Eric, who follows his heart only to find that love exacts a terrible price. Marvan, the master swordsman, who takes more pleasure from killing than he should. And Krish, the humble goatherd, with a destiny he hardly understands and can never accept - will discover just how much Smiler's Fair changes everything.

Never judge a book by its cover. I went straight into Smiler’s Fair believing it to be a light YA fantasy. Instead I got one of the most gory and shocking beginnings I’ve ever read, followed by a series of events that rarely failed to include some form of death, sex or violence. Aside from this, book #1 in the Hollow Gods series is pretty much your quintessential run-of-the-mill fantasy fare.

The author has created a fairly well-imagined world with some nicely original quirks, such as cities pulled by mammoths, civilisations that are constantly on the move, and the eponymous Fair itself. However, despite the book’s title, Smiler’s Fair doesn’t actually feature as prominently as you might expect; and many other features of the book are disappointingly generic, from the unimaginative fantasy tropes (gods, magic runes, giant birds) to the lacklustre title of the series itself. Although, I did like that the author had thought about how the fantastical elements would affect everyday life, such as the fact that metal is a rarity because the worm men make it almost impossible to mine properly.

The story itself is average, and is pretty much evenly paced throughout. As with most fantasy novels, it’s written from several different characters’ POVs, which unfortunately don’t really gel together all that well. Though most of them start out well, the characters don’t always go in the directions you’d expect, or even in any particular direction at all, which put me in mind of the somewhat dreary A Dance with Dragons. The characters, rather than developing perceptibly, simply each undergo a sequence of events that serves to get them from A to B, and character development is often seemingly pushed aside in favour of ‘shock value’ character turns. Indeed, the novel as a whole becomes needlessly darker as it progresses, and it feels like the author is trying to force the story into the ‘grimdark’ category, which doesn’t suit it very well at all.

As for the characters, it’s unfortunate that there just isn’t that much to like about most of them; and the ones who do start out likeable (or at least promising) end up being dislikeable or just plain dead. One particular gripe I had was that the author seems to have fallen into the trap of so many female authors who create gay male characters: that is, defining them solely by their sexuality.  Not only is Eric gay, but he is also a whore, and almost every one of his thoughts is of a sexual nature, even in extreme situations (although admittedly his situation at the end of the book does seem to imply that his character will be developed more in the future). I did like that Krish the prophesied ‘hero’ is somewhat weak and unconventional; however, he’s also fairly bland and two-dimensional, which makes him about as unsympathetic as most of the other characters. That’s not to say I disliked all the characters, though ironically the ones I found most interesting were the more peripheral ones, particularly Sang Ki and Olufemi.

To sum up: Smiler’s Fair was a pleasant surprise for the first 50 pages or so.  After its strong beginning, however, it was distinctly average, and after a while it was merely disappointing. A story that looked to have a lot of potential quickly degenerated into a collection of unsympathetic characters undergoing improbable and sometimes ridiculous events . . . most of which had nothing at all to do with Smiler’s Fair.