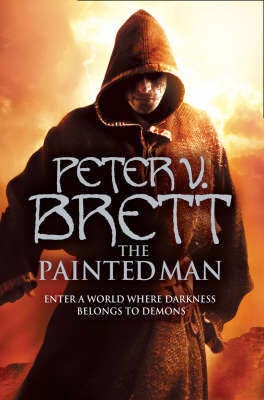 Eleven-year-old Arlen lives with his parents on their small farmstead. As dusk falls upon Arlen's world, a strange mist rises from the ground, and hungry demons materialize from the vapours to feed on the living. As the sun sets, people have no choice but to take shelter behind magical wards and pray that their protection holds until the creatures dissolve with the first signs of dawn.

When Arlen's life is shattered by the demon plague, he is forced to see that it is fear, rather than the demons, which truly cripples humanity. Believing that there is more to his world than to live in constant fear, he must risk leaving the safety of his wards to discover a different path.

In the small town of Cutter's Hollow, Leesha's perfect future is destroyed by betrayal and a simple lie. Publicly shamed, she is reduced to gathering herbs and tending an old woman more fearsome than the corelings. Yet in her disgrace, she becomes the guardian of dangerous ancient knowledge.

Orphaned and crippled in a demon attack, young Rojer takes solace in mastering the musical arts of a Jongleur, only to learn that his unique talent gives him unexpected power over the night.

Together, these three young people will offer humanity a last, fleeting chance of survival.

This was another re-read for me. I bought and read this book on holiday about four years ago. I’ve since bought both the published sequels in the Demon Cycle, The Desert Spear and The Daylight War, but somehow never got around to reading them. Well, I’ve finally decided to delve back in, starting with a re-read of The Painted Man to refresh my memory.

I have to say, returning to the world of wards and Corelings was a lot of fun. The premise of the Demon Cycle – that demons rise from the earth’s core every night to prey on humanity, who just barely manage to keep them at bay with magical wards – is both frightening and fascinating. The series can be read as a dystopia as much as a fantasy: the rural inhabitants of Brett’s world were once allegedly much more advanced, with science and machinery and huge civilisations which expanded rapidly in the absence of demons. The humans became so pre-occupied with destroying each other that they fell easily when the demons returned, and most of their knowledge was lost. Once-great civilisations have been reduced to isolated towns and cities, which offer protection from demons but are essentially warded prisons.

There were a lot of things from this book that I’d forgotten, but one thing I remember vividly is how much the earlier chapters hooked my interest and began building tension right from the outset. It was great to experience this again, and to feel the palpable fear of the characters: their initial reaction to the bloody aftermath of a demon attack, their dread of the approaching darkness, and their absolute terror the first time we see the wards fail at night.

For the most part, I liked and connected with the three main characters, each of whom is given their own individual coming-of-age story. Rojer Halfgrip is an orphaned cripple, who now has to strike out on his own and make his reputation as a skilled Jongleur. Leesha trained for years as a herbalist after her own reputation suffered, and now returns to her village wiser, stronger, and ready to make a difference. And Arlen, forced as a child to watch his mother die after his father’s cowardice during a demon attack, is now well-trained, well-travelled and well-equipped to take the fight to the demons for the first time in thousands of years. Each character has their own strengths, and each are equally enjoyable to read about, although it’s a bit of a shame that Rojer’s tale never really seems to develop into anything more than a sideline. Perhaps he’ll have a bigger role in the next book, The Desert Spear: I’m looking forward to finding out!

Click here to view The Painted Man (Demon Cycle #1) on Amazon UK
Posted by Unknown at 17:38