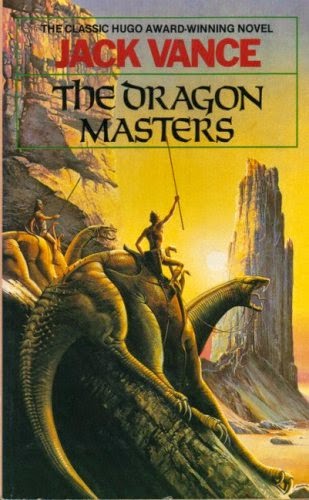 (I reviewed this book quite a while ago, but didn't post anything to the blog as I was having technical issues at the time).

I was a bit unsure going into this one, since my first brush with Jack Vance (Suldrun's Garden: reviewed here) didn’t exactly win me over. But a friend was kind enough to send me this out of the blue, and since it’s so tiny, I thought I’d give it a go.

It turned out to be just what I needed. I’d been struggling a little bit with my reading mojo, and being able to read something so quick and easy really helped, and made me eager to read more of the same – that is, fantasy with a hint of SF. I’d been wanting to try SF for a while, and I think The Dragon Masters was a nice way of easing me into it.

The story itself is fairly simple: far into the future, on a distant planet named Aerlith, the last of humankind live on a world where dragons and monsters are commonplace and are used in warfare, either as mounts or as soldiers. Every few generations, a star called Coralyne burns brighter than usual, and this always coincides with the arrival of the Basics, an alien race who turn up in spaceships and kill and capture hundreds of humans before leaving again. The leaders of men must find a way of defeating the Basics, and of appropriating their technology in order to seek out any other remaining colonies of humans in the universe.

I liked the story, and I liked the setting and fantasy elements, especially the Sacerdotes and the different types of dragons. I also liked how it posed questions, such as who is really the more barbaric out of the humans and the aliens. I did struggle to empathise with the main character – as I did in Suldrun’s Garden – but with a story as short as this one it feels pointless to gripe about such things.

All in all, I had fun with this one - although I'm not sure I would have enjoyed it quite as much had it been any longer . . .

Click here to view The Dragon Masters on Amazon UK
Posted by Unknown at 11:03