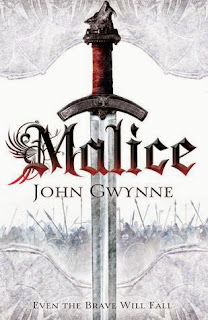 The Banished Lands have a violent past where armies of men and giants clashed in battle. An uneasy peace reigns, but now giants stir once more, the very stones weep blood and there are sightings of gigantic wyrms. Those who can still read the signs see a prophecy realized: sorrow will darken the world, as angels and demons make it their battlefield.
Young Corban watches enviously as boys become warriors and yearns to join them, determined to make his family proud. It is only when everything he knows is threatened that he discovers the true cost of becoming a man.


As the kings look to their borders, and priests beg answers from the Gods, only a chosen few know that the fate of the world will be decided between two champions, the Black Sun and the Bright Star. And with their coming will be a war to end all wars.


Malice is the debut novel of fantasy writer John Gwynne, and is the first book in his new series The Faithful and the Fallen. Despite being fantasy, the book has a Celtic, almost historical feel, with character and place names such as Dun Carreg, Cywen, Gwenith, Mordwyr, Dath etc., and with its use of dialect, such as ‘aye’ and ‘bairn’. I actually really liked this: it creates atmosphere and helps when imagining both the setting and the character accents, and also makes the story feel more real. At the same time, however, the book also has a strangely dystopian feel, being set in desolate lands in an era following an apocalyptic event known as the Gods-War. It’s an interesting combination.
I found Malice to be a little slow to begin with: there are times when it felt like I was reading every little detail of everything that happens, particularly to the children, and I felt that this made it a little bit repetitive. However, it picks up after a while, and by the end I wanted to start straight away on the next book (which unfortunately isn’t available until next year). The characters are interesting as well as ambiguous, and the way the author switches between different points of viewcreates tension and pace very effectively, often reminding me of A Song of Ice and Fire in this respect.


Another aspect of the novel that I felt was reminiscent of GRRM was the characters themselves, several of whom are morally ambiguous. Yet most of them are likeable, or at the very least sympathetic, and it’s really interesting to see them change, particularly those who are being subtly manipulated. The characters are all very different – we have the blacksmith’s son Corban (my personal favourite PoV), his fiery knife-throwing sister Cywen, the skilled archer and former brigand Camlin, the gentle giant-hunter (and unwilling noble heir) Kastell, and finally Veradis, the first-sword and blood-brother to an unwitting servant of Asroth. All these characters are very different in their own ways, and it’s not immediately clear how they relate to one another, but as the plot unfolds we begin to see how they each might be involved in the grand scheme of things.
The Faithful and the Fallen is clearly intended to be a sweeping epic series, with conflict spreading across the entire world and involving gods and monsters. However, there are some nice personal moments that stand out in my memory, namely involving Corban, such as the naming of his horse (Shield) and his defence of the wolven cub Storm. It would be nice to see more of these, and perhaps more character-driven scenes within battles, which are often described in ways that give more of an overview than a one-to-one account.


Malice won the Gemmell Morningstar Award for best debut novel earlier this year, and although I haven’t read any of the other books that were shortlisted for this one, I can understand why this one made the list. Slow to start with, but intriguing, and improving in pace and intensity with every chapter. As Conn Iggulden announces on the cover: it’s a ‘hell of a debut’. I look forward to reading the rest of the series.
My rating: 4/5