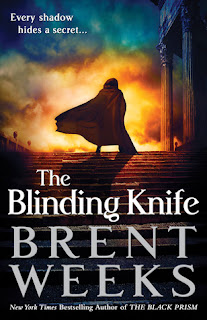 
He thought he had five years left – now he’s got less than one. With fifty thousand refugees, a bastard son and an ex-fiancée who may have learned his darkest secret, Gavin’s got problems on every side.
As he loses control, the world’s magic runs wild, threatening to destroy the Seven Satrapies. The old gods are being reborn and their army of colour wights is unstoppable.


The only salvation may be the brother whose freedom and life Gavin stole sixteen years ago.


Earlier this year The Blinding Knife beat King of Thorns and Red Country to win the Gemmell Legend award. Since Joe Abercrombie is one of my favourite authors and Mark Lawrence’s King of Thorns is one of the best books I’ve read in 2013, I expected big things from Brent Weeks’ fifth novel. And I’m pleased to say that he totally delivered them.
The Blinding Knife is the second book in the Lightbringer series. It picks up where the first book, The Black Prism, left off, and seamlessly continues the story of Kip and company. Unlike a lot of second books, this one doesn’t use info-dumps to convey information from the first book, and it doesn’t feel like it’s stalling or just filling in the gap before the big finale. Just like the first book, it’s full of action and great characters, and there is always something happening that is both exciting and relevant to the plot.


What I liked most about The Blinding Knife is that the characters continue to develop in interesting ways. My favourite character from the first books was Kip, and this book focuses a lot more on him, continuing what is essentially his coming-of-age story. Despite being the son of the most powerful man in the world, Kip has to constantly overcome obstacles: he’s fat, he’s illegitimate, he has little experience with using his magical talents, and he has enemies who are constantly working to use him to undermine his father. Weeks writes Kip’s character in a way that makes him likeable and strong and yet also very human, the end result being that we spend most of the book hissing at his enemies and cheering him on.
The other characters are just as interesting. The Blinding Knife introduces us properly to the Prism’s father, Andross Guile, who harbours a mysterious secret and whose schemes run much deeper than anyone suspected. His slave Grinwoody is almost as villainous as he is (despite only featuring as a very marginal character), and the main ‘antagonist’ – The Colour Prince – is actually quite sympathetic, his reasons for what he does being quite logical. Other characters from the first book feature again as PoV characters, and undergo very interesting character arcs: the main one here is Liv, who is struggling with the conflict between what she has learned and what she had previously spent her whole life believing. I was a bit disappointed that Karris was somewhat side-lined in this book, but I suppose you can’t have everything.


I’m not a huge fan of cliff-hanger endings, and The Blinding Knife leaves us on one hell of a cliff-hanger, but since the next book comes out next year I’m not too frustrated. I suppose.
The writing is smooth and captivating, the action scenes are brilliant and well-written, the main characters are three-dimensional, and the unique magic system is becoming more and more interesting the more we learn about it. I was originally annoyed at this book for being voted as better than King of Thorns: I’ll now grudgingly admit that maybe, just maybe, it is.