Review: 'She Who Waits' by Daniel Polansky 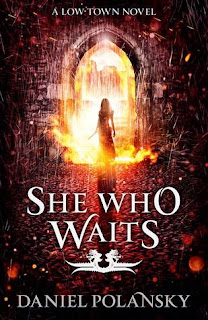 Low Town: The worst ghetto in the worst city in the Thirteen Lands. Good only for depravity and death. And Warden, long ago a respected agent in the formidable Black House, is now the most depraved Low Town denizen of them all.


As a younger man, Warden carried out more than his fair share of terrible deeds, and never as many as when he worked for the Black House. But Warden’s growing older, and the vultures are circling. Low Town is changing, faster than even he can control, and Warden knows that if he doesn’t get out soon, he may never get out at all.


But Warden must finally reckon with his terrible past if he can ever hope to escape it. A hospital full of lunatics, a conspiracy against the corrupt new king and a ghetto full of thieves and murderers stand between him and his slim hope for the future. And behind them all is the one person whose betrayal Warden never expected. The one person who left him, broken and bitter, to become the man he is today.
The one woman he ever loved.
She who waits behind all things.


She Who Waits is the third instalment in Daniel Polansky’s Low Town series, and seemingly rounds off this particular trilogy about the life of Warden. It’s a thrilling and thoroughly enjoyable read that takes all the elements we’ve come to love about the series – grimy settings, disreputable characters, casual vice, fascinating flashbacks and wicked schemes – and multiplies them by ten to create a convoluted but fast-paced plot leading to an explosive and heart-stopping conclusion.
As with the author’s previous novels (The Straight Razor Cure and Tomorrow the Killing) the story follows the character of Warden, a disgraced former soldier and Black House operative who is now a drug dealer. Not only does he practically run Low Town, but he also secretly manoeuvres critical events within politics, not to his own advantage, but to the disadvantage of those who have previously caused him harm. Most of the characters he encounters are despicable in varying ways, their negative attributes brilliantly exaggerated to the point of grotesqueness. Low Town and its denizens are ugly, inside and out, and this makes those rare moments of goodness or peace experienced by Warden all the more striking.

One thing I will point out is that there’s not really that much emphasis on Albertine, the woman who betrayed him years ago and is therefore partly responsible for the way his life has turned out since. However, I don’t think the novel suffers from this, since the focus of the series has always been on Warden’s decisions in the present rather than his dwelling on the past; and, of course, the title is clever, referring not just to his lost love but to the goddess of death, commonly known as ‘She who Waits Behind All Things’. And that’s a pretty apt title, since the novel’s events are set against the usual Low Town backdrop of frequent violence and murder.

In a nutshell: the dialogue is gritty and facetious, the protagonists are tough and easy to root for, the plot is clever and brilliantly executed, and the final awesome culmination of events leaves us feeling wretched yet satisfied.