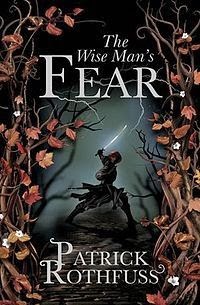 My name is Kvothe. You may have heard of me.


The man was lost. The myth remained.
Kvothe – the dragon-slayer, the renowned swordsman, the most feared, famed and notorious wizard the world has ever seen – vanished without warning and without trace. And even now, when he has been found, when darkness is rising in the corner of the world, he will not return.


But his story lives on and, for the first time, Kvothe is going to tell it . . .

The Wise Man’s Fear is the second instalment of The Kingkiller Chronicles, a fantasy trilogy centred on the ‘autobiographical’ tale of the protagonist, Kvothe. It picks up where The Name of the Wind left off, continuing Kvothe’s tale without much  preamble, and cleverly reminds us of key events and important information as it goes along, rather than simply dumping it all at the start.


The format of the story follows the same pattern as the previous novel: Kvothe narrates the chronological events of his younger years, and the tale is occasionally interrupted by interludes focusing on the present day. Kvothe is one of the Edema Ruh, renowned travelling performers and famed for their storytelling skills; however, the narrative is somewhat stale and rambling when compared with the previous novel, perhaps because it covers a much shorter period of his life and strings it out over a thousand pages. Roughly half the novel is an account of Kvothe’s continued shenanigans at the university: most of these are highly amusing, though others seemed tediously similar to those in the previous book.


It’s clear that the author is playing with the concept of the unreliable narrator, and Kvothe is doubly unreliable: he’s narrating his story for an audience, and it is also being set down for posterity. As such it becomes something of a fun game for the reader to question some of his assertions: for example, he claims to have learned an entire language in a day in order to successfully be acquitted at a public trial; however, he deliberately skips over this part of his story, refusing to supply details of the trial because his readers will find it boring. He later proceeds to give a long and detailed account of his time in the Fae with Felurian, during which he spends several dull chapters doing a whole lot of nothing. Kvothe’s egotistic determination to focus on the parts that he finds most interesting is no doubt a deliberate part of the author’s message about the misleading nature of stories, and the dangers of becoming a legend in your own lifetime; unfortunately, this also makes the novel significantly less compelling than its predecessor.


The Wise Man’s Fear isn’t without its strong points, though. One of Rothfuss’ biggest strengths is the ease with which he creates characters that are not only likeable, but also complex and memorable.  The Name of the Wind was almost solely focused on Kvothe; it was introspective and very much self-indulgent. In The Wise Man’s Fear, there is still plenty of this trademark self-indulgence to be found (Kvothe’s ego is not something to be easily pushed aside) but there is also a much wider awareness of the world and its inhabitants. The reader is given a distinct impression of each character no matter how infrequently that character appears in the story. We have Kilvin, the gruff yet somehow fatherly Master Artificer; Tempi, the quiet but deadly Adem mercenary; Denna, the flirtatious yet insecure con-artist-turned-musician; Bast, Kvothe’s loveable apprentice with a dark secret; Auri, the frail and flighty girl who lives beneath the university; and lots more.  Kvothe’s mentor, the enigmatic Master Elodin, has a relatively small amount of page space devoted to him, yet he is undoubtedly many readers’ favourite character, myself included. He is one of the nine Masters of the university and is more powerful in the magic of naming than most men alive; he is mischievous, brilliant, and ever-so-slightly insane; he walks on roofs, engages in petty crimes against other Masters who have offended him, and encourages his students to stand naked in thunderstorms.


My point is, it’s characters such as Elodin that make this story dance off the page, and I think this, along with the beautifully poetic narrative voice, is definitely one of the stronger aspects of The Wise Man’s Fear. Though some of the setting and events feel a little stale, and despite the fact that the plot is occasionally lacking, well, plot, The Wise Man’s Fear is an entertaining and passionate novel, and I would recommend it to those who thoroughly enjoyed The Name of the Wind.


Click here to buy The Wise Man’s Fear on Amazon.
Click here to read my review of The Name of the Wind (Kingkiller Chronicle #1).

Email ThisBlogThis!Share to TwitterShare to FacebookShare to Pinterest
Labels: Books, Fantasy, fiction, Patrick Rothfuss, The Kingkiller Chronicles, The Name of the Wind, The Wise Man's Fear