Review: 'The Republic of Thieves' by Scott Lynch 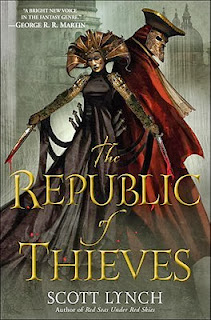 Locke and Jean barely escaped with their lives from what should have been the greatest heist of their career, in the port city of Tal Verarr. Now they head north, looking for sanctuary and an alchemist who can cure the poison that is slowly killing Locke. They find neither, but with their luck, money and hope exhausted, they receive an offer from a power that has never had their best interests at heart: The Bondsmagi of Karthain.


In exchange for the chance that Locke might be saved, the Bondsmagi expect the two Gentlemen Bastards to rig an election in their home city of Karthain. They will be opposed. The other side has already hired the services of Sabetha Belacoros, the one person in the world who might match Locke’s criminal skill, and the one person in the world who absolutely rules his heart.
Now it will be con artist against con artist in an election that couldn’t be more crooked, all for the benefit of the mysterious Bondsmagi, who have plans within plans and secrets they’re not telling . . .


The Republic of Thieves is the long-awaited third instalment in the Gentlemen Bastard Sequence, and takes place several weeks after the ending of Red Seas under Red Skies. Locke Lamora is suffering from the effects of poison, and he and Jean Tannen must do the unthinkable – work with their worst enemies – in exchange for a cure.
I have to start by saying that it’s inevitable that The Republic of Thieves is going to be held up against the standards of the first two books in the series; and I’m very sad to say that it fell somewhat short of my expectations. The first two books – particularly Red Seas under Red Skies – were tense, fast-paced and exhilarating; The Republic of Thieves is fairly slow, plodding and uneventful. It doesn’t have the sense of urgency that characterised the other books, and the characters don’t really seem to have much to lose (or gain). Since the stakes aren’t as high, neither are Locke’s grand schemes as complex and exciting as those that filled his previous adventures in abundance.


The Republic of Thieves follows the same format as Lynch’s previous books, with interludes from the past (mainly focusing on the gang’s performance of the play ‘The Republic of Thieves’) dispersed throughout the main story (the election in Karthain). However, the other books had a few short interludes that added to the main story; fully half of The Republic of Thieves is comprised of ‘interludes’, so much so that it’s like reading two separate books alongside one another. While both the past and present tales are good, the parallel tale of the Gentlemen Bastards’ performance of the eponymous ‘Republic of Thieves’ is, for me, the strongest aspect of the story. I would have preferred to see it as a separate novella – it was basically the main focus of this story, but both plotlines suffered (or so I felt) from the constant (and sometimes frustrating) switching back and forth. Both tales are enjoyable, but to have them interwoven in such a way meant that the main plot lost momentum at every turn.
I didn’t really appreciate the revelation about Locke’s ‘true’ identity. I thought it came out of nowhere, and felt that it was unnecessary to reveal it in such a manner. I’m also not too keen on how the book ended – I would have liked some closure on the flashbacks (Was Chains pleased with their achievements? What did he do about Moncraine?), but I’m guessing this will be continued in the next books.


One other minor thing that really bothered me was the misspelling of ‘stories’ as ‘storeys’ – it really started to grate on me since it’s used quite frequently, although I guess that’s a fault with the editor and not the author.
Despite these criticisms, I did enjoy reading The Republic of Thieves. One aspect of the book that I felt did live up to my expectations was the character of Sabetha. She’s very well-written: as cunning and intelligent as Locke, yet much more ruthless, while at the same time possessing a certain charming femininity. She is very likeable, and the gradual unveiling of the history of the tentative relationship between her and Locke is very well done. The fact that she also has a special friendship with Jean is a nice touch, and her devious strategies to try and beat him and Locke are pitiless but amusing. It’s also brilliant to finally see the full complement of the Gentlemen Bastards – Sabetha has always been absent from the flashbacks in previous novels, and her presence changes the dynamics of the group in a fun and interesting way.


To sum up, then, I liked the book, but I think it suffered for having such a high standard to try and meet. I’d say the main plotline deserves 3/5, but I enjoyed the flashback tale so much that I’m bumping the overall rating up to 4.


My rating: 4/5 (for ‘The Republic of Thieves’ sections rather than the ‘5-year election’ chapters)