Review: 'The Lies of Locke Lamora' by Scott Lynch 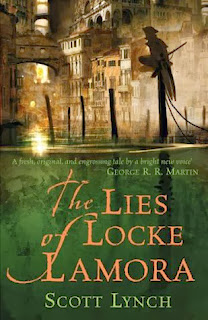 The Thorn of Camorr is said to be an unbeatable swordsman, a master thief, a friend to the poor, a ghost that walks through walls.
Slightly built and barely competent with a sword, Locke Lamora is, much to his annoyance, the fabled Thorn. And while Locke does indeed steal from the rich (who else would be worth stealing from?), the poor never see a penny. All of Locke’s gains are strictly for himself and his tight-knit band of thieves: The Gentlemen Bastards.
The capricious, colourful underworld of the ancient city of Camorr is the only home they’ve ever known. But now a clandestine war is threatening to tear it apart. Caught up in a murderous game, Locke and his friends are suddenly struggling just to stay alive . . .
The Lies of Locke Lamora – the first instalment in the Gentlemen Bastard Sequence – belongs to that brilliant breed of fantasy that relies more on clever plotting, suspense and characterisation than on spectacular magic and obsessive world-building. It’s full to bursting with thieves and murderers, gangs and torturers, cons and disguises, swearing and revenge.
And sharks. Plenty of sharks.


The story follows a small band of thieves known as the Gentlemen Bastards as they initiate an elaborate confidence scheme on a wealthy couple. Despite months of planning, the scheme is soon jeopardised by a new crime boss known only as the Grey King. His arrival in the city – along with that of the powerful Bondsmage working for him – brings terror, blackmail and murder, and heralds the beginning of disaster for the Gentlemen Bastards.
One of my favourite aspects of The Lies of Locke Lamora is the characters, who are morally grey yet somehow sympathetic. Locke, our main protagonist, is a thief, and yet at no point do we think of him as a ‘bad’ person: it’s a lifestyle he’s forced into at a very young age. The fact that he turns thieving into a fine art as he gets older is the novel’s main source of entertainment, and the author completely draws us into Locke’s elaborately clever and outrageous schemes. The rest of the Gentlemen Bastards are very likeable too – Bug is endearingly young, brave and desperate to prove himself, while the mischievous twins Calo and Galdo provide some amusing banter and friendly insults – but Jean Tannen is the only member of the group aside from Locke who is really fleshed out as an individual, mainly through the use of flashbacks.


The author makes use of flashbacks and interludes very effectively, using them to reveal important parts of the mythology of Camorr, as well as to illustrate how the relationship between the central characters developed over the years. These interludes are interposed very frequently throughout the entire novel, and are used effectively to build tension and reveal certain things about the plot at strategic moments. They do occasionally meander in ways that diminish rather than heighten the suspense, but are mainly very relevant and interesting.
The characters are complex and fascinating (Jean is as well-read and good at maths as he is deadly with his hatchets, while Locke himself alternates between the roles of Thorn, common thief and saviour of the city), the action is bloody and gripping, and the plot has more twists and turns than the tunnels under Shades Hill. What more can you ask for in a debut novel?